The cap Bobby Thomson wore during his epic game-winning home run off Brooklyn Dodgers pitcher Ralph Branca in the final playoff game of the 1951 season will be put up for auction for the first time as part of SCP Auctions’ spring auction beginning Monday, April 30. SCP Auctions, a leader in the field of important sports memorabilia and cards, expects the cap to attract bidding in the six figures.

In the annals of baseball, few moments can be recalled that were more dramatic and polarizing than Thomson’s iconic game-winning home run off Branca to enable the Giants to edge the arch-rival Dodgers. Dubbed “The Shot Heard ‘Round The World,” Thomson’s feat resonates more than a half century later as one of the most memorable home runs in baseball history. 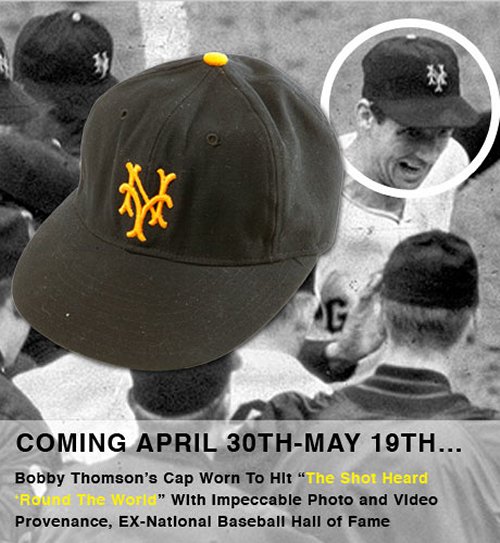 Perhaps no fan had a better view of that fabled clout than Bernard Davies, who occupied his regular field-level box seat at the Polo Grounds on Oct. 3, 1951. Immediately after Thomson’s pennant-clinching home run cleared the left-field wall, Davies, along with his son, Michael, jumped onto the field to join the throng of Giants players in the melee that greeted Thomson as he crossed home plate. Davies secured the cap right from Thomson’s head moments before he was lifted up on the shoulders of his teammates. Davies can be identified in both film footage and press photographs of the event.

The cap has been a cherished heirloom within the Davies family, and has also been prominently showcased for more than 28 years (1984-2012) at The National Baseball Hall of Fame in Cooperstown, N.Y. as a centerpiece to the museum’s “Shot Heard ‘Round The World” exhibit. 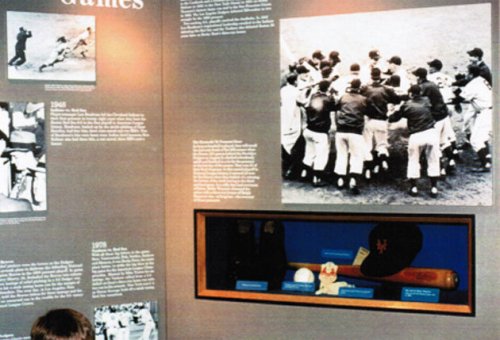 “The meaning of the cap to me and my family is huge,” said Davies’ grandson. “We are avid sports fans. I recognize the significance of Bobby’s home run and its meaning to those who were alive then.”

“The New York Giants, the Polo Grounds, and now Bobby Thomson are gone, but that shot continues to be heard ’round the world,” said SCP Managing Director Dan Imler. “This cap is the most significant piece of memorabilia in private hands from that iconic moment. SCP is proud to bring this baseball heirloom to the collecting public.”

Bidding will be open to registered bidders on Monday, April 30 and will conclude on Saturday, May 19. The auction will be conducted online at SCPAuctions.com. The spring auction will also feature hundreds of other historically significant sports memorabilia items and cards, including the earliest known jersey worn by New York Yankees legend Babe Ruth, one of the most valuable pieces of sports memorabilia ever brought to auction. For more information on how to participate, visit www.scpauctions.com or call (949) 831-3700