A milestone ball from one of the most feared hitters in baseball history just blasted into SCP Auctions’ 2021 Fall Premier. Barry Bonds’ 500th home run ball will hit the hobby for the first time when it appears in our upcoming sale, courtesy of the man who rescued the splash hit from the turbulent waters of the San Francisco Bay.

In a year where he would also break the single-season record for most homers with 73, Bonds’ biggest bomb of the campaign came on April 17, 2001. In the bottom of the eighth inning on that night, Bonds took Los Angeles Dodgers pitcher Terry Adams deep to right field, so deep that the ball splashed into the depths of the San Francisco Bay next to the stadium then known as Pacific Bell Park in San Francisco.

As the fans went wild inside the confines of Pac Bell, an even crazier scene unfolded in those waters known as McCovey Cove just beyond the right field fence. At least a dozen boaters scrambled to try to snatch the piece of baseball history as it headed through the night sky toward the cove. Joseph Figone, a former Candlestick Park groundskeeper, was one of those boaters and saw the ball heading in his direction. 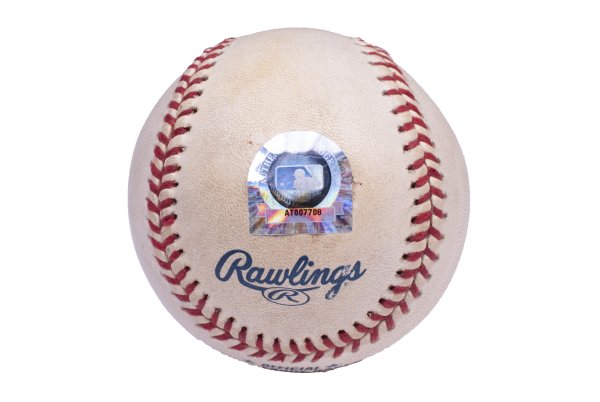 Figone had already grabbed Bonds’ first splash hit on May 1, 2000, during the ninth game at the park. That shot was hit off New York Mets pitcher Rich Rodriguez. It was also the first splash hit in the park’s history.

Figone revved the engine of his small motorboat and managed to save the historic big fly from the murky waters after dodging a wetsuit-clad man also pursuing the homer. Once on shore, two representatives from Major League Baseball began placing hologram stickers on everything Figone had with him but the kitchen sink. They stickered the ball, boat, motor, life jacket, fishing net, jersey he was wearing, and even the champagne bottle he popped to celebrate the moment.

The next morning, Figone took the ball straight to the bank and deposited it into his safe deposit box. The 500th home run ball, along with Bonds’ first splash hit, briefly left the bank to be exhibited at the Newseum in Washington, D.C. in 2002. Otherwise, they have been stored and secured until now. Both balls will be on the auction block for the first time ever in SCP Auctions’ 2021 Fall Premier from Oct. 13-30. Don’t miss your chance to bid on the two splashy parts of baseball lore.
For more information about SCP Auctions, visit www.scpauctions.com.