“You, sir, are the greatest athlete in the world. I would consider it an honor to shake your hand.”  King Gustav V to Jim Thorpe at the 1912 Stockholm Olympics.  BST auctions is pleased to announce the Missouri Find; a significant accumulation of Jim Thorpe and Oorang Indians items. The group originates from a collection Native American artifacts from the early 20th century. To register, view, and place bids, visit bst-auctions.com.

One hundred years later and little more needs to be said besides those two words.

He was a world class athlete, likely the greatest of all time, a professional baseball player and pioneering football sensation. 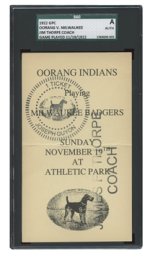 In 1922 Thorpe coupled his love of football with that for hunting dogs and went to work for Walter Lingo in Larue, Ohio. Lingo was a visionary who developed and maintained one of the largest dog kennels in the world; breeding Oorang Airedale Terriers. Thorpe’s job was to assist with the kennels and coach a football team that would help to promote dog sales. Thorpe recruited a number of former Native American players including Pete Calac and fellow Hall of Famer Joe Guyon. Other players on the roster included Joe Little Twig, John Baptiste Thunder, Stillwell Saunooke and Xavier Downwind. For $100 Lingo purchased a franchise in the fledgling NFL and the Oorang Indians were born. 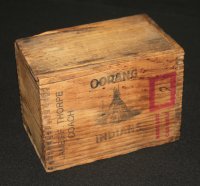 For the most part the NFL was a back page sports story in the early 1920’s. In the absence of the internet, television and radio; print was the only form of media besides word of mouth to promote teams. Ticket sales were the only form of revenue. As mentioned before Lingo used his team not as a direct means to generate revenue, but to advertise and promote his dogs. Thorpe’s name carried sufficient clout to attract people to the games, however halftime performances were conducted featuring the Lingo’s Airedale dogs and the football players.

The items from this find center around Thorpe and the use of his name as an advertising tool…it is literally stamped, printed or embossed on everything. There are promotional postcards, some addressed to newspaper editors, which have the appearance of mini-broadsides. Two games (both from 1922) are featured on the postcards, one game being against the Columbus Panhandles and the other against the Milwaukee Badgers. A few of the postcards carry stampings of the name of Oorang players and “One Ticket” surrounding the Oorang Airedale logo; likely to be given away by the players and to be used as a ticket to get into the game.

The ticket vouchers are stamped with the player names John Baptiste Thunder, Joe Little Twig and Joe Guyon. These vouchers represent some of the earliest known tickets for NFL games. 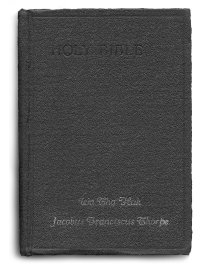 In 1922 there were no chartered plane flights to games and most travel was done by train. It is easy to romanticize travel by rail but the trips were often long, hot and bumpy. The team supplies were crated for transport from game to game. Some of these crates have survived 90+ years and were also part of this find. The crates carry team markings and logos, some have tax stamps as they carried tobacco, and all have “James F. Thorpe Coach” stamped on their surfaces. In addition to the crates personal cloth storage ditty bags for Joe Guyon, John Baptiste Thunder and Joe Little Twig were found in the crates.

A keepsake box/trunk (not constructed in the same fashion as the railroad crates) with Joe Guyon’s name stamped on the inside lid will also be auctioned.

Probably the most significant and unique item from the group is Jim Thorpe’s personal Bible. Presented to him in 1917 by the American Bible Company (accompanied by a presentation card that honors him for his prowess in the Olympics and “National Sport”- in 1917, he was with the NY Giants in the World Series – 4-2 loss to the Chicago White Sox- and coached the Canton Bulldogs to a league title); the dark blue Bible has Thorpe’s Christian (James Frances Thorpe) and Native American (Wa-Tho-Huk- translated to “Bright Path.) names embossed on the front cover. “Canton Bulldogs World Champions 1917” is stamped on the fore edge.

As the 100th anniversary of the NFL approaches, pre-Grange collectibles will continue to increase in desirability and value…especially those attributed to the legendary Jim Thorpe. We look forward to offering these incredible items as part of our Fall 2016 Premier Auction.