BST Auctions Spring 2018 event will be closing this Sunday, April 22 at 5:00PM EST with extended bidding to follow.  To bid on an item during the extended period a bid must have been placed on that item sometime prior to 5:00 PM on the 22nd.  If you have yet to register or have not had a chance to look at the auction we offer a wide variety of vintage baseball, football and other sports cards and memorabilia.  Some items of interest include PSA registry baseball and football sets, a 1952 Mickey Mantle rookie card, a T206 Cobb (red background) in a PSA 4 holder, and a game used Roberto Clemente bat.  Check out the auction at www.BST-Auctions.com and feel free to direct any questions to us at mail@BST-Auctions.com. 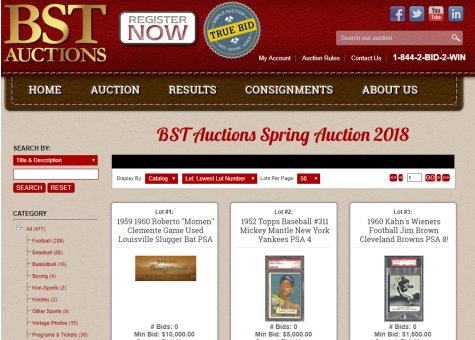 1959-1960 Roberto “Momen” Clemente Game Used Bat
Offered here is a collector’s dream, a game used Louisville Slugger bat from early in Clemente’s career with the Pittsburgh Pirates. The bat is a rare “Momen” model, which was Clemente’s nickname from earlier in his career. “Momen Clemente” is inscribed on the barrel. Momen is originally a family nickname; legend has it that as a child the precocious Roberto would often reply “momento” (Spanish for “just a minute”) when asked a question, the impending answer important, and the young Clemente needing a minute to ponder his reply. He did not use the name after 1960 insisting on being “Roberto” (as a nod to his heritage).

The Hillerich & Bradsby bat has been thoroughly examined by the experts at PSA/DNA and deemed to have had “excellent game use” and has been graded PSA GU 7.5. Using a number of characteristics and markings (including the Momen nickname which only appeared on Clemente’s bats from 1955 to 1960 and “GENUINE” which first appeared on Slugger bats in 1959) the issue period for the bat has been determined to be 1959 to 1960. The S2 (stamped on the knob of the handle) model number bat (Hillerich and Bradsby records show that Clemente ordered 12 of these for the 1959-1960 seasons) is 35 inches in length and weighs 33 ounces. Although not mentioned on the PSA paperwork, the bat appears to have had slight/minor surface restoration. 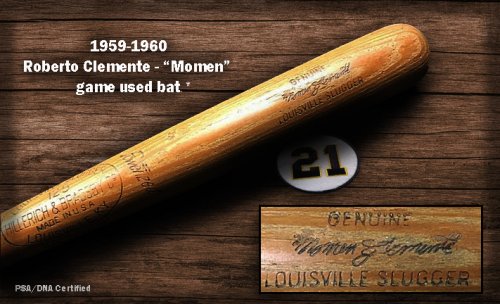 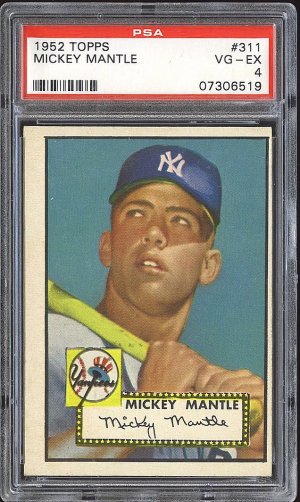