The first auction will begin Friday September 25th and will be a one lot auction of Cal’s 1997 Chevy Tahoe that was given to him by The Orioles in honor of his breaking Lou Gehrig’s consecutive game record. Bidding will end on October 3, 2020.  Cal has signed the dashboard and in the trunk is not only an equipment bag full of game used and signed items from Cal’s career, but also a $5,000.00 gift certificate to Goldin Auctions so you can get a head start on acquiring mementos from Cal’s career. 100% of the proceeds from the auction of the truck and its contents will be donated to the Cal Ripken, Sr. Foundation. “It is an honor to get the opportunity to work once again with Cal Ripken, Jr. He is one of the most loved and important icons in American sports history and his on and off the field accomplishments are second to none,” said Goldin Auctions Founder and CEO Ken Goldin. “The bidders are in for a treat when we debut the core of the collection in our October Legends Auction beginning Oct 12th.” 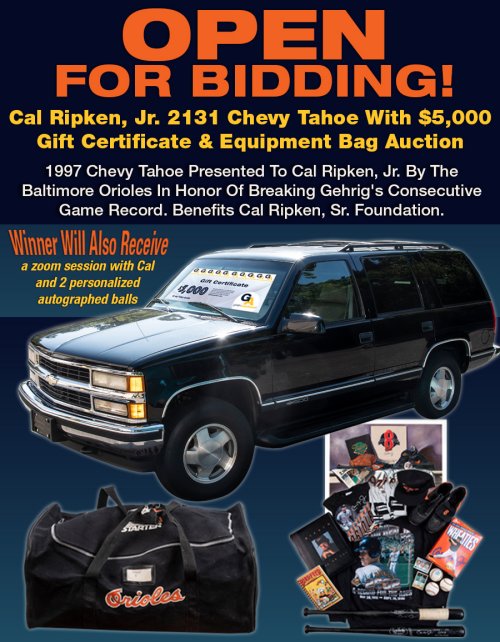 Future auctions will include game used items and memorabilia from historic events and accomplishments in the great career of Cal Ripken jr. A portion of all items sold will benefit the Cal Ripken, Sr. Foundation.

“Over the last year I have had the chance to explore my collection and it amazed me how many unique items I was able to compile throughout my career” said Hall of Famer Cal Ripken, Jr. “With the celebration of the 25th anniversary of 2131 still fresh in my mind, I thought this would be a great time to share some of them with other collectors and lovers of baseball. It will also raise funds for our work with kids under the Foundation named for my Dad.”

Cal Ripken, Sr. Foundation
The Cal Ripken, Sr. Foundation helps to build character and teach critical life lessons to at-risk young people living in America’s most distressed communities. The Foundation is a national 501(c)(3) nonprofit organization founded in 2001 to honor the legend and spirit of Cal Ripken, Sr. Everything we do maintains the values which Cal, Sr. embodied as a devoted coach and mentor: leadership, work ethic, personal responsibility, and healthy living. Through our transformational at-risk youth programs and Youth Development Parks, multipurpose parks, we create safe opportunities for youth in need to develop valuable life skills, build character, connect positively with local law enforcement, and learn how to make productive choices for their future. By partnering with youth-serving organizations and schools across the country, we provide educational life skills curriculum for adult mentors to use to better engage and teach the children we serve. Our dedicated corporate partners and generous donors support these opportunities to impact millions of young lives every year.