Modern trading cards across sports including basketball, soccer and football dominated the bidding at Goldin’s August Card & Memorabilia Auction, which closed last night. Topping the auction was a 2003-04 “Exquisite Collection” LeBron James signed patch rookie card (graded BGS MINT 9/BGS 10) which sold for $2,029,500, an all-time record for this card in any grade.

The auction, which featured more than 1,200 rare, collectible items closed with $12 million in total sales, including record sales for Tom Brady, Giannis Antetokounmpo, Cristiano Ronaldo and Erling Haaland cards. The August auction also included incredible WWE fan experiences and SummerSlam memorabilia, which sold for a total of more than $110,000. One buyer won a pair of tickets to WrestleMania 38 and a meet & greet with WWE legend, The Undertaker while another won a WWE headquarters tour with Triple H.

“The big headline of the night was obviously LeBron. His Exquisite Collection rookie, one of the hobby’s flagship cards, broke another record but we also saw the 2020-21 Panini Prizm Gold sell for nearly $100,000,” said Ken Goldin, Founder and Executive Chairman of Goldin. “Soccer items continue taking off also. With Ronaldo announcing his return to Manchester United, we saw a surge in bidding for his items, including a new record set for his rookie card.” 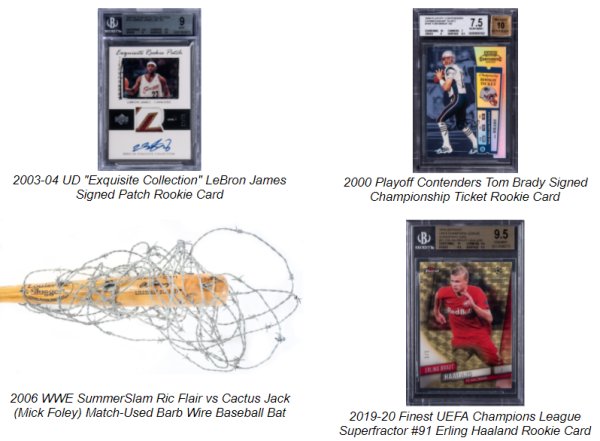 The auction also featured notable non-sports items, including two cards featuring and signed by JAY-Z, the rapper that has been a dominant force in popular culture, which went for a total of nearly $20,000. A piece of wing fabric from the Wright Brothers’ aircraft the Wright Flyer” was also featured and went for $7,380, alongside a collection of 1959 Fleer cards featuring the iconic American comedy team Three Stooges, which sold for a total of $32,595.

Other notable items from this auction included:

Goldin has built a reputation as the trusted leader in trading cards, memorabilia and collectibles. So far this year, the company has already done over $260 million in sales. Goldin is actively accepting consignments for its future auctions. To inquire about consigning items, email info@goldinauctions.com.