The only known surviving Italian issue movie poster for Casablanca sold Saturday, July 29, for a record $478,000 at a public auction of vintage movie posters held by Heritage Auctions in Dallas, Texas. Measuring a massive 55.5 by 78.25 inches, the 1946 Casablanca Italian 4 Fogli poster matched the world record for the most valuable movie poster ever sold at public auction.

“The buyer has just set a world record and acquired what we in the poster collecting world would equate to a masterpiece,” said Grey Smith, Director of Vintage Posters at Heritage Auctions. “The stunning artistry put into this poster makes it stand head and shoulders above any paper produced for the film.” 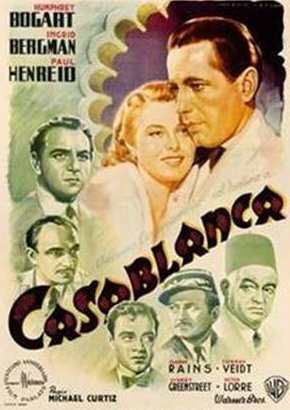 Previous Italian posters for the film have sold for as much as $203,000 and U.S. issues of the poster have fetched $191,200. Each of the previous record holders were sold by Heritage Auctions, the world’s largest auctioneer of vintage movie posters.

The poster is the first of its kind to surface in recent history. Featuring artwork by Luigi Martinati, the image of the cast of characters is considered the best image found in any of this film’s numerous advertisements, Smith said.

The auction featured additional rare posters from the film with a half sheet poster auctioned for $65,725 and a post-war Spanish release poster selling for $35,850.

The total for Heritage Auctions’ July 29-30 Movie Posters Auction in Dallas was $2.7 million.

Italian posters are well known for their extraordinary quality, and this illustration by Luigi Martinati is considered perhaps the finest image found in any advertisements for the film, which went from being a film studio executives hoped would break a profit to one of the most beloved films ever produced.

“The buyer has just set a world record and acquired what we in the poster collecting world would equate to a masterpiece,” Heritage Auctions Vintage Posters Director Grey Smith said. “The stunning artistry put into this poster makes it stand head and shoulders above any paper produced for the film.”

Intensely competitive bidding pushed the only known copy of the extraordinary Metropolis (UFA-Cinema Art Ltd., 1928) Australian Pre-War Daybill well past its pre-auction estimate, ultimately bringing $215,100. Original paper for this genre-defining classic is among the rarest in the hobby, and ranks high on the list of posters coveted by the most serious of collectors.

The auction featured two offerings that drew $107,550, including a Supernatural (Paramount, 1933) One Sheet. Believed to be the most ever paid for any poster featuring Carole Lombard, this is one of just three copies known to exist. Lombard resisted playing the role because she viewed herself as a comedienne first and foremost, but turned in a stellar performance as the film’s homicidal heiress that highlighted her dramatic range.

The other offering to realize the same price was a Frankenstein (Universal, 1931) Style A One Sheet, which is one of only six known copies in existence. This stunning stone litho one sheet, which is heavily coveted by serious collectors, depicts the horror classic that some consider the most influential film in Hollywood history. Not only did this adaptation of Mary Shelley’s classic novel bring the young horror genre into the mainstream, but it also produced the horror vocabulary and imagery that remain today, including the mad scientist, the misunderstood monster, the angry villagers carrying torches, etc. – all horror film staples that originated in Frankenstein.

This The Lady Eve (Paramount, 1941) One Sheet, which went for $83,650, spotlights the romantic comedy that revealed that Barbara Stanwyck and Henry Fonda were just as gifted as comedic actors as they were in dramatic features. One sheets are rare for this classic, which is based on the short story Two Bad Hats.