In what is now a new record sale for the sports collectibles industry, a PSA-certified original Type 1 photo showing Detroit Tigers Hall of Famer Ty Cobb sliding into third base just sold for $250,000. The aged, circa 1910, 8” x 10” photo, taken by renowned sports photographer Charles Conlon, shows the “Georgia Peach” sliding hard into New York Highlanders’ third baseman Jimmy Austin for a stolen base during a game at New York’s Hilltop Park. The private sale was brokered by J.P. Cohen, president of Memory Lane Inc. in Tustin, California. The buyer wishes to remain anonymous at this time.

“It’s truly an incredible price for an original photograph,” said Cohen. “Our collector really wanted that photo and we were more than happy to facilitate the sale.”

A “Type 1” photo, as defined by Professional Sports Authenticator (www.PSAcard.com), is a first-generation photograph, developed from the original negative, during the period (within approximately two years) from when the picture was taken. Though portions of the Cobb photo have chipped away over time, this example is the only Type 1 specimen of that moment known to exist. The record price crushes the previous mark for the same photo, which sold at auction in 2015 for $77,098. 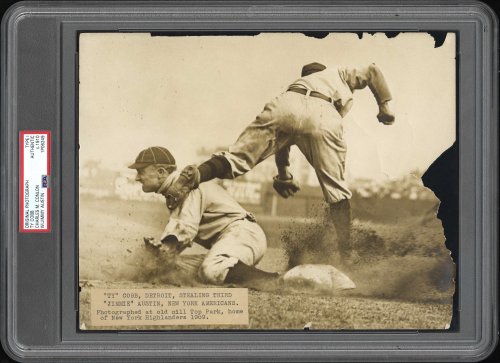 Henry Yee, lead photo authenticator for PSA, explained that what Conlon captured with that single image was nearly unheard of at the turn of the 20th century. “Action photos before World War 1 are very, very rare,” he said. “This is a remarkable photo for its time and its stature as one of the greatest baseball images ever recorded has only grown since then.”

The story behind the photo is amazing as well. During Conlon’s career, which spanned from 1904 to 1941, he took mainly portraits of MLB players. But this photo – easily his most famous – was an action shot he took while standing near third base on that fortunate day. When Conlon took the picture, he was under the hood of a bulky, tripod-supported Graflex camera. After snapping each shot, he had to change glass plates. Conlon, who passed away in 1945, recalled the instance during an interview with The Sporting News in 1937:

“The strange thing about the picture is that I did not know I had snapped it. I was off third, chatting with Jimmy Austin. Cobb was on second with one out, and the hitter was trying to bunt him to third. Austin moved in for the sacrifice. As Jimmy stood there, Cobb started. Jimmy turned, backed into the base, and was greeted by a storm of dirt, spikes, shoes, uniforms — and Ty Cobb.

“My first thought was that my friend, Austin, had been injured. When Cobb stole, he stole. Spikes flew, and he did not worry about where. I saw Cobb’s clenched teeth, his determined look. But in a moment, I realized he [Austin] wasn’t hurt, and I was relieved because Jimmy and I were very close friends. Then I began to wonder if by any chance I had snapped the play. I couldn’t remember, but I decided to play it safe and change plates anyway. I went home kicking myself. I said, ‘Now there’s a great picture and you missed it.’ I took out my plates and developed them. There was Cobb stealing third. In my excitement, I had snapped it, by instinct.”

The PSA-encapsulated photo will be on display at Memory Lane Inc.’s corporate booth at this year’s National Sports Collectors Convention in Chicago from July 31 through August 4.

PSA is the world’s largest trading card, autograph and memorabilia authentication and grading service. Since 1991, PSA has examined and certified over 33 million collectibles with a combined value of over $1 billion. For additional information, visit www.PSAcard.com.