Bidding is in progress for the Classic Auctions Current 2022 Auction and will close December 13, 2022. With 1,000+ lots, we bring you another sensational selection of quality trading cards, game-worn jerseys and championship rings, from breathtaking collections such as The Red Berenson Collection, The Jacques Villeneuve Personal, The Ed Belfour Personal and much more! Bid, view and register for the auction at classicauctions.net.

This auction also includes one of the most important sports championship ring selection that we’ve ever offered. Important and rare rings from NBA, NFL, MLB and NHL championships, including Ray Nitschke’s 1966 Green Bay Packers Super Bowl I Championship 14K Gold and Diamond Ring, what we consider one of the greatest awards in the entire discipline of trophy and ring collecting. 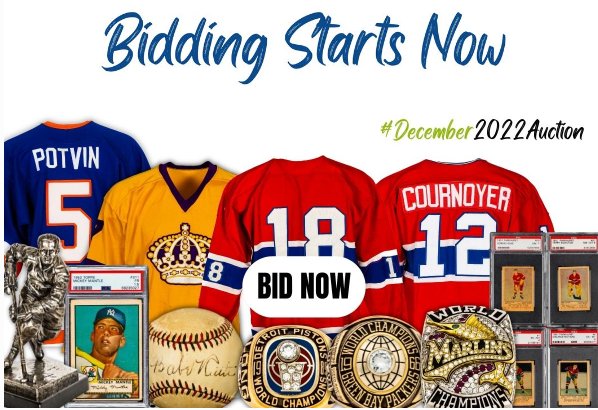 The United States and Canada are host to 4 of the 5 top sports leagues by revenue in the world: the NHL, NBA, NFL and MLB. The sports of these four leagues were all developed in their modern forms in North America.

The championship ring selection offered in our current December 2022 Auction is definitely of the greatest we’ve seen in years:

Classic Auctions is honoured to offer to the hobby what we consider one of the greatest awards in the entire discipline of trophy and ring collecting, with the 14K gold and diamond ring presented to Nitschke for the Green Bay Packers Super Bowl I championship. (Nitschke’s Super Bowl II ring sold for $121,324 in August of 2020)

Not officially known as the “Super Bowl”, the historic game was played between two rival leagues (NFL and AFL) who previously agreed to stage an annual season-ending contest between their respective champions, before they would officially merge after the completion of the 1969 season.

The HOF linebacker’s ring is being offered 56 seasons after the Packers kicked off a new era in pro football with a 35-10 win over the Kansas City Chiefs in Los Angeles in January of 1967.

Take a look to see a few of the other amazing rings offered in our December 2022 Auction, or visit our website to see all Championship Rings, Awards and Trophies.