Featuring just over 1,100 lots of diverse hockey material which included the personal collections of Ray Bourque, Don Simmons and Gary Howatt as well as selections from the incomparable autograph collection of E.R. Hamlyn, the Classic Auctions Fall 2019 Auction was a huge success, with something for every bidder, including hundreds of game-worn jerseys, trading cards, autographs and much more! The total realized for the entire auction was $1.393 Million, with strong prices garnered for important jerseys, autographs and cards. 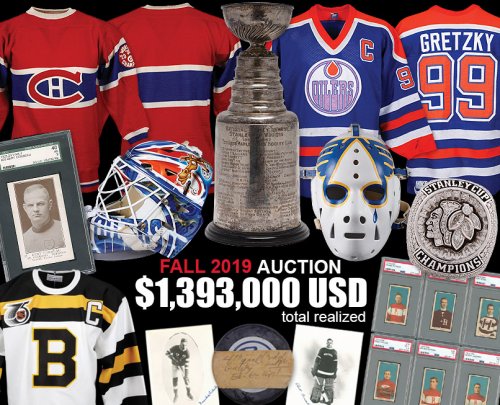 Top 5 – Most bids
Attracting considerable attention, it’s no surprise our top 5 lots that received the most bids was led by numbers one and two on the all-time scoring list, with Gordie Howe’s Circa 1957 Detroit Red Wings Stall & Dean Game-Used Gloves receiving 29 bids before being sold for $10,194, along with Wayne Gretzky’s April 6th 1983 Edmonton Oilers Four-Goal Game Playoffs Goal Puck that interested 24 bidders before being hammered down for a hefty $6,516.

Rounding out the top 5:

Other lots that received considerable bidding include:

Here’s a look at the remaining Top 5 lots with the highest prices realized:

Trading Cards
Results on trading cards were especially strong, with prices realized on wax boxes showing the considerable demand for unopened material.
Have similar cards to consign? Contact us now

CONSIGNMENTS FOR WINTER 2020 AUCTION ARE NOW OPEN – CONTACT US NOW