The Classic Auctions Fall 2020 Auction was the first auction held on our new website and with our new closing procedure. And as always, first times are always exciting. But this was also the closing of one of the largest offerings ever put together by our team, since 1994. Collectors responded massively and we closed the night with total prices realized of $1,700,194. Let’s take a closer look at the results and of course, a few surprises.

Modern and vintage game-worn jerseys are certainly one of the favorite categories in every auction we hold. If you’ve been following us lately, you probably know that this auction featured an impressive selection of game-worn jerseys, and the results below are just as incredible. With 25 bids in total on this Shea Theodore’s 2017-18 Vegas Golden Knights Inaugural Season Game-Worn Stanley Cup Finals Jersey ($6,450 realized), 22 on the Karlsson ($2,732) and 17 on Perron’s jersey ($4,339), it’s hard not to notice how popular the Golden Knights jerseys were last night. 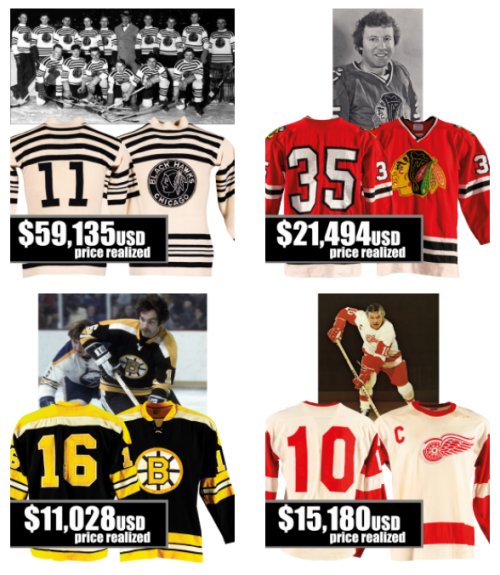 Since this is probably the best time to buy trading cards, as we demonstrated earlier this month, most of the cards and premiums did pretty well in our Fall Auction.

Other results worth mentioning include the 1985-86 O-Pee-Chee Hockey Wax Box ($9,582 total realized) and the surprising Gordie Howe Signed Rookie Card, closing the night at $6,355 with the third largest number of bids (27)!

In addition to cards, jerseys or the items shown below, other lots have caught the attention of our auction manager and the rest of our team.