Bidding is in progress for the Classic Auctions Winter 2020 Auction and will close on February 25, 2020. The auction features, once again, another impressive selection of cards and sports memorabilia. Fall Auction features items from the personal collections of Jean Beliveau, Summit Series hero Paul Henderson and Hall of Fame netminder Ed Belfour. Bid, view and register for the auction at classicauctions.net. 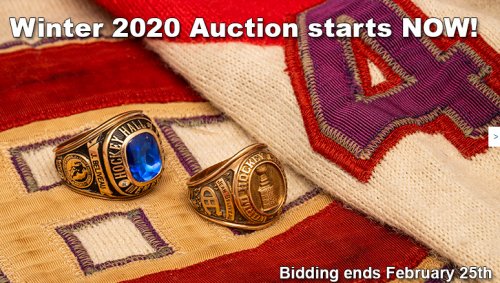 Items from the Estate of Jean Beliveau
“Beyond being one of the greatest players in NHL history, Jean Beliveau was class personified”. This quote from no less than Mario Lemieux wonderfully encapsulates the reverence felt for hockey’s preeminent gentleman. Taking a page from the book of Le Gros Bill, we are thrilled to announce a “classy” grouping of paramount specimens from Mr Beliveau’s direct family will be offered in our upcoming Winter 2020 Auction, along with items originally sold in the 2005 Jean Beliveau Auction including Jean’s spectacular 1958-59 Stanley Cup championship 10K gold and diamond ring and important 1955-56 Art Ross Trophy. Keepsakes new to the hobby direct from the family of the inaugural Conn Smythe winner include Jean’s absolutely stunning “500th NHL Goal” sculpture presented by Hockey Night in Canada in 1971, his “1955-56 to 1959-60 NHL’s Greatest Dynasty” Stanley Cup championship trophy and much more! This is a hobby event not to be missed!

Check out the rest of our Featured Lots! And incredible historical pieces from the following categories: