Classic Auctions Spring 2016 Auction closed with a huge push and finished with an astounding total of $1,320,097 realized! This auction featured some remarkable items, and here is a quick rundown of some of the highlights!

By far, the highest price ever realized for a Maurice “Rocket” Richard Montreal Canadiens Game-Worn Wool Jersey is this 1949-50 example, which closed at over $129K. This extremely rare wool example is one of a very small number of Richard gamers that has ever become available in the hobby, and this one certainly captured the attention and bids of many serious collectors! It looks like Richard’s jerseys have reached the upper echelon, with collectors ready to pay top dollar for one of hockey’s greatest legends! 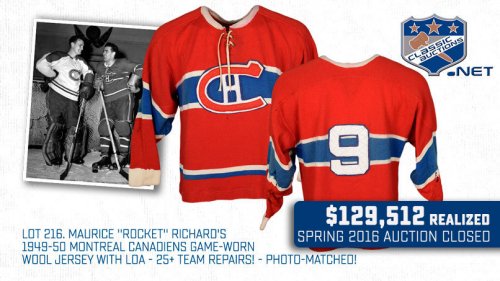 Other Canadiens jerseys fared well in this auction, with several other Habs legends lots closing well. Jerseys from Guy Lafleur, Henri Richard and Doug Harvey all finished with strong results.

Several other remarkable jerseys finished strong as well, including this1972 Summit Series Jersey, worn by Ron Ellis, which fetched just shy of $59,000! A fantastic gamer, with plenty of game wear, this piece of Canadian hockey history was one of our most viewed lots. Also, this Tim Horton 1969 Toronto Maple Leafs Jersey sold for over $33,000, and Jim Craig’s 1980 Team USA Pre-Olympic Jersey closed at $12,493, with both sitting in the top 10 of jerseys in this event. 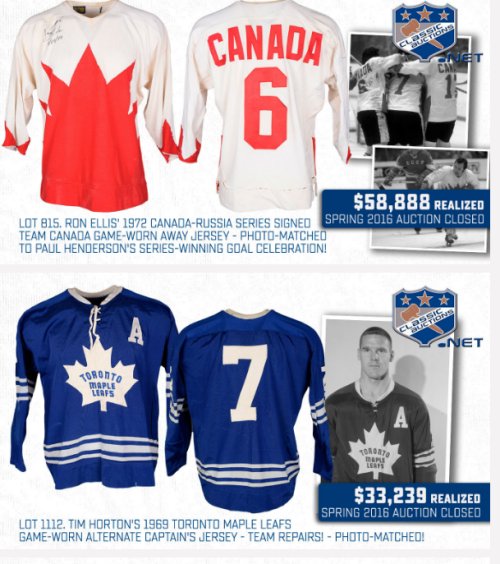 Canada’s 1948 Men’s Hockey Olympic Gold Medal, won by the RCAF Flyers at St. Moritz, sold last night for almost $31,000! Julius ‘Pete’ Leichnitz, who was a reserve for the team, was awarded the medal after the Canadian team went undefeated in the 8-game tournament. Multiple other items from his personal collection were sold at auction when the hammer dropped early this morning. 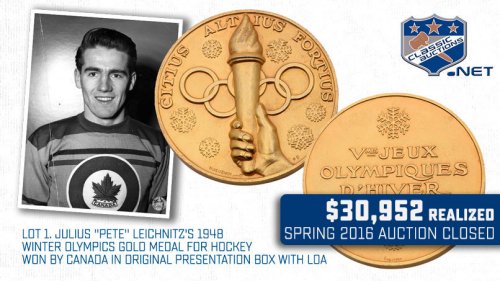 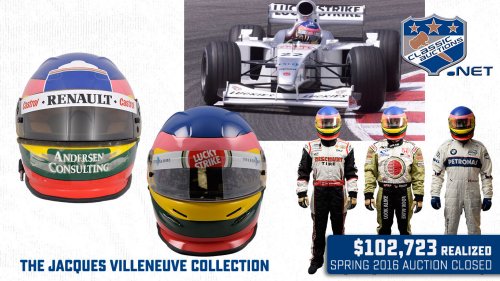 Hot on the heels of the Canadian Grand Prix event in Montreal, the Jacques Villeneuve Collection closed at over $100K! Several of Jacques’ race-worn helmets closed extremely well, with a helmet from his 1997 Championship Season and one from his 2006 Season with BMW Sauberfetching over $13K each. Several other race-worn helmets and various items from this collection sold well including race-worn suits and other items.

We had interest from around the world for this collection, with exposure on social media driving thousands of views and bids from new customers in over a dozen new countries!

Here’s a various assortment of other items that performed well in our Spring 2016 Auction:

There it is! The Spring 2016 Auction has come to a close, but we are certainly not taking the summer off.  Classic Auctions Consignment Team will be heading all over the US and Canada throughout July and August, and the consignment period is now open for our Fall 2016 Auction, which will go live in October.  If you are interested in getting involved with our next event, drop us an email at consign@classicauctions.net or call us at 450-638-7058 to let us know about your items or collection.