It’s on! Classic Auctions Spring 2016 Auction is in progress. Some have already called it the best Classic Auctions event in years.  The auction is  packed with over 1100 remarkable items. As usual, the auction features many pieces that are part of the fabric of hockey history.

The front cover  of the auction catalog features the ‘Rocket’, Maurice Richard, proudly wearing the ‘Bleu-Blanc-Rouge’ of the , from the 1949-50 season. This spectacular wool jersey is a thing to behold, and the history that is held in this sweater is simply mind-boggling. It is the premiere item in the Maurice ‘Rocket’ Richard Collection. 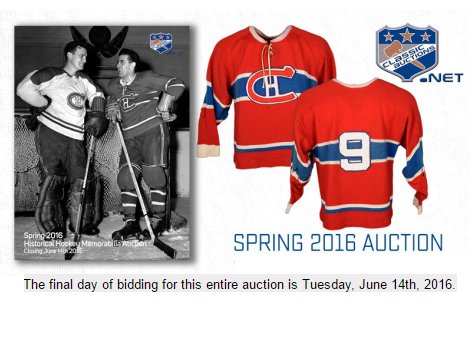 The back cover of the catalog is an equally riveting piece of hockey lore, as Julius ‘Pete’ Leichnitz’s 1948 Olympic Gold Medal for Men’s Ice Hockey is pictured, and the story it tells is somehow sorely under-appreciated. The RCAF Flyers team represented Canada at the games, which were the first after World War II, and going into the event, the Flyers did not inspire confidence amongst Canada’s supporters. However, as the team travelled to Europe and played several pre-Olympic exhibition games, their line-up gelled and they eventually went undefeated to capture the unlikeliest of Gold Medals. This medal, as well as other remarkable items, are available in the Julius ‘Pete’ Leichnitz Collection. 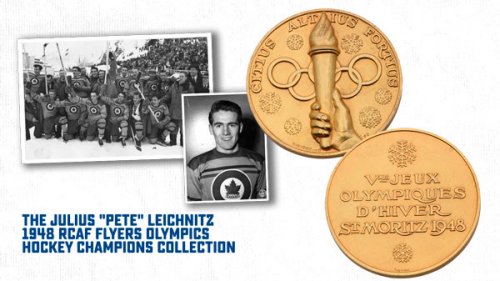 Do you feel the need for speed? We’ve got that and more with the Jacques Villeneuve Collection. Race-worn helmets, suits and other items from Jacques’ personal collection are featured here, and cover various stages of his standout career in Formula 1, NASCAR and V8 Supercar. 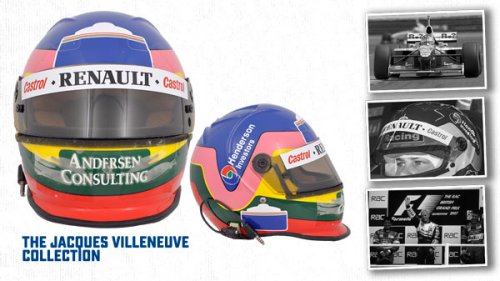 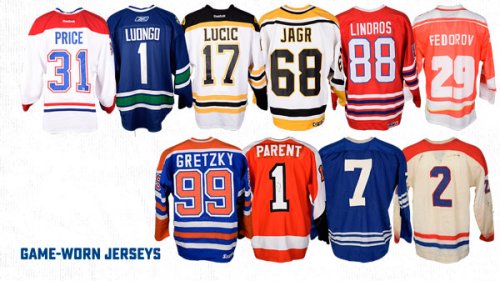 ***If you are going to be at the Formula 1 Grand Prix in Montreal this weekend – June 10-12, 2016, stop by our booth in the Elite Restaurant Suites tent, located by Turn 1 and Grandstand 12. We will have several items on display from the Jacques Villeneuve Collection and also some premium items from our Spring 2016 .Auction.