Classic Auctions is pleased to announce another hugely successful auction, with especially strong bids from start to finish during our 2017 Spring Auction offering, with a large number of important items receiving especially impressive sums, again emphasizing our status as the one and only industry leader for your important and cherished hockey memorabilia.  Final prices realized fetched over $1.2 Million. 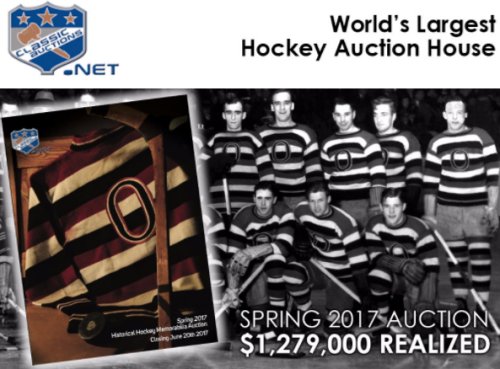 Thanks to all participating bidders and congratulations to those who won lots for making our 2017 Spring Auction a huge success! Whether it’s the Lord Stanley and Queen Victoria signed military commission from 1878, or the glove worn by iconic legend Maurice Richard during the height of his historic career in the early-1950s, Classic Auctions has proven through our 20+ years of service to the hockey memorabilia community that we secure the highest prices realized along with the absolute best memorabilia, including personal collections from some of the most noteworthy superstars the world’s most beautiful game has ever seen. From our family to yours, thank you! We look forward to bringing more exceptional, one-of-a-kind hockey treasures to you in the near future!