With over 1,150 individual lots, 5 personal collections, hundreds of game-worn jerseys, tradings cards, autographs and more, Classic Auctions Spring 2019 Auction really had something to please all types of hockey and sports memorabilia collectors. And it did. Total realized for the entire auction was once again over $1.1M and results were specifically great for trading cards, jerseys and trophies/awards.

Personal Collections
Both the Trottier and Hadfield personal collections attracted a fairly high number of bidders and resulted in a few bidding wars as we expected. Bryan Trottier’s 1990-91 Pittsburgh Penguins Game-Worn Stanley Cup Finals Jersey concluded the night with an incredible 18 bids and a total realized of $12,990 USD, making it into the Top 10 highest prices realized for the entire auction.

Items that made it to our Top 5 – Most bids are, we can assume, items that attracted the most attention. However, some items that made our Top 5 – Highest Prices (below) may not have had as many bids due to their high prices but could still be considered as the most popular items in our Spring 2019 Auction.

Probably one of the biggest surprises was a total of 28 bids on Mickey Mantle Mid-1950’s New York Yankees PSA/DNA Certified Type II Photo with LOA – The Photo Used for His 1951 Bowman Rookie Card!, making it to our #1 spot for most bids in the entire auction.

Other lots with most bids in the auction are:

As it usually is, the list of lots with highest prices realized is lead by 2 game-worn jerseys. Game-worn jerseys remain the most popular category in our auctions as we keep offering the highest quality possible to collectors.

Here’s a look at our Top 5 lots with the highest prices realized: 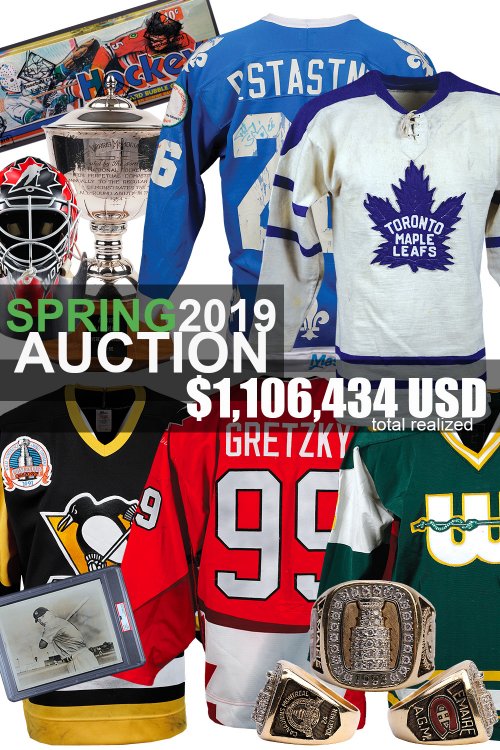 Last but not least, results on trading cards have been nothing less than astonishing. Results on wax boxes were amazing and high grade rookie cards all finished with incredible prices realized.