Bidding is in progress for the Classic Auctions Spring 2020 Auction and will close on June 16, 2020. The auction features, once again, another impressive selection of cards and sports memorabilia. Highlighted by the Bob Gainey Personal Collection and the Colorado Rockies, Avalanche and Other Collorado Teams Game-Worn Jersey Collection and many more incredible historical memorabilia, our Spring 2020 Auction is heating up the block once again.  Bid, view and register for the auction at classicauctions.net. 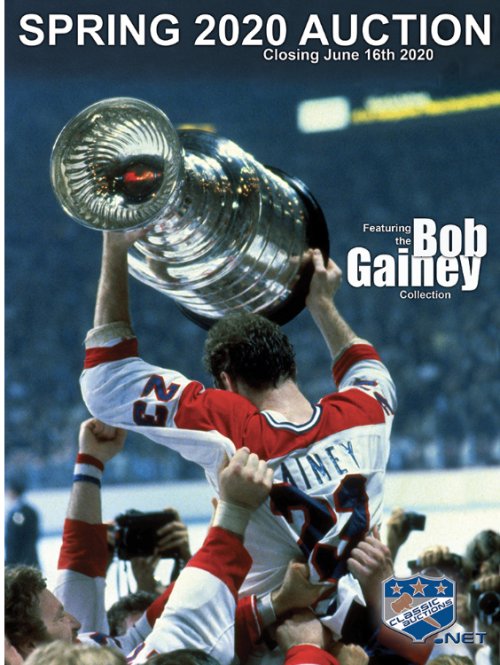 The Bob Gainey Personal Collection
With his talent for shutting down opposing players recognized by astute NHL scouts during his time with his hometown Peterborough Petes, Bob Gainey would be drafted 8th overall by the Montreal Canadiens, in 1973. Bringing a defensive style of play to an especially explosive Habs offense, Gainey’s stalwart play earned the superstar a quartet of Frank J. Selke wins throughout his tenure with the Habs, with the captain’s “C” added to his sweater throughout most of the 1980s to reward his unwavering leadership.

Gainey would celebrate five Stanley Cup championships with the Bleu Blanc Rouge and would have his #23 sweater retired by the famous club, with the ultimate honour occurring in 1992, forever joining the pantheon of enshrined immortals in the Hall of Fame.

Ready to absolutely thrill the collecting cognoscente, we offer an endless treasure trove of remarkable material originating from Gainey’s personal collection, highlighted by the superstar’s 1976, 1978 and 1986 Montreal Canadiens Stanley Cup championship gold and diamond rings. There is a plethora of hardware including Stanley Cup championship trophies for 1977, 1978, 1979 and 1999, along with Frank J. Selke trophies celebrating two of his four wins, in 1980 and 1981. Items representing Gainey’s time with Team Canada are also present including his 1976 Canada Cup trophy, with a number of additional keepsakes and mementos cherished by the superstar available. We even have the photo-matched Canadiens jersey the captain wore during the 1989 Stanley Cup finals.

Originally prized as souvenirs of accomplishments and now ready to live a second life, as memorabilia representing one of the greatest careers of the modern era, from Mr. Gainey’s personal collection to you, we pass on these paramount relics to be revered indefinitely. We should note that Bob Gainey will be giving part of the proceeds to the Montreal Canadiens Children’s Foundation, which “encourages physical activity and the adoption of a healthy lifestyle among underprivileged youth from 4 to 17 years old”.