Classic Auctions Winter 2018 Auction offered stellar results, with numerous items closing much higher than anticipated. This was, without a doubt, the best auction Classic Auctions has had in the past eight years! Our market is very strong for quality right now, much better than years past. This month-long auction received thousands of bids on the 900+ items that were available for auction.

Items from the Paul Coffey Collection were of great interest, as were the Ed Belfour and Eric Lindros Collections and the 2005-06 Upper Deck ”The Cup” Hockey Card Sidney Crosby Autographed Rookie Patch. Traditionally hot items, including vintage hockey cards and game-used equipment, were in high demand, as were big ticket pieces such as championship rings and trophies. 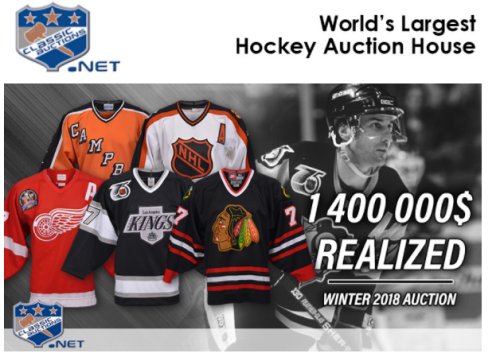 Others
Although Classic Auctions is the largest hockey auction site in the world, we do offer interesting items from other sports as well.

Items from the NBA, CFL, NFL as well as auto-racing and boxing were featured and highlights from this auction included aBabe Ruth Signed Official National League Ford C. Frick Baseball, which sold for $6,057 with BP.  Good activity on the Pete Rose’s 1984 Montreal Expos Signed Game-Worn Jersey (sold for $5 384 with BP) and CFL fans will love that Angelo Mosca’s 1972 Hamilton Tiger-Cats Grey Cup Championship 10K Gold and Diamond Ring (sold for $7,688 with BP) went to a good home.

Rings, Awards and Trophies
Always a popular category with our collectors, we offered a good number of rare treasures in gold and silver. For instance, the Spectacular 1928-29 George Hainsworth’s Montreal Canadiens Vezina Trophy (16”) (sold for $40 220 with BP) was a very active auction, as was Bernie Nicholls’ 2011-12 Los Angeles Kings Stanley Cup Championship Tiffany & Co Sterling Silver and Diamond Ring (sold for $29 462 with BP).

Gretzky
When milestone mementos from the Great One become available, it’s always interesting. But when you have the record-breaking puck up for auction, it’s an event by itself! Wayne Gretzky’s October 15th 1989 “1851st Point” Milestone Record Goal Puck with Letter of Provenance (sold for $20 121 with BP).

Upcoming Spring 2018 Auction
Stay tuned for information about our Spring 2018 Auction, which will get underway at the end of May. Those who seek quality goaltender memorabilia and equipment will find this one to be a treat! We are actively and aggressively seeking consignments and watch for our consignment adventures with stops across the continent very soon!

Contact us today to place your consignments in our Spring 2018 Auction.?