Collectors will have a chance to bid on more than 1,000 lots of the rarest and most beautiful posters ever offered by Heritage Auctions at its Movie Posters Auction Nov. 18-19 in Dallas.

Highlights include the very rare Style A one sheet to the 1931 classic horror film, Dracula (est. $150,000), in which Bela Lugosi brought to life the vampire count of Bram Stoker’s gothic horror novel. This is only the second known copy of this beautiful poster. 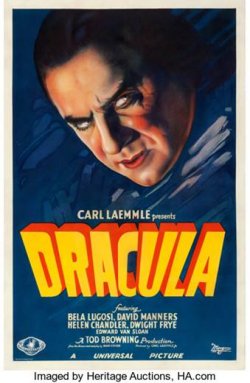 Also offered for the first time is a glorious large French poster for the first release of Casablanca, the great wartime romance Academy Award winner. With magnificent artwork by Pierre Pigeot, this outstanding poster also has a chance to realize a six-figure return, with a pre-auction estimate of $100,000.

A Style L one sheet to the 1925 Lon Chaney silent classic, Phantom of the Opera (est. $50,000-100) is another addition to the classic horror titles. Done in vibrant stone lithography, this extraordinary example is one that can become a highlight of any collection.

Collectors also will have a chance to bid on a rare large-format six sheet to The Day the Earth Stood Still (est. $45,000), the 1951 science fiction classic. Larger format posters like this one, which is being offered by Heritage for the first time, more often than not were pasted to walls or glued together and thrown away after use.

Also available is the only known copy of the large format poster for Stagecoach (est. $40,000), the 1939 Western classic directed by John Ford that brought John Wayne to national attention. These posters always have remained exceedingly elusive and this six sheet never has been seen in modern times.

For more information about these and other lots in Heritage’s Nov. 18-19 Movie Posters Auction, visit www.HA.com/7167.