The current Clean Sweep Auction is in progress .   To register and bid before the auction which closes on July 10, 2019 go to www.Cleansweepauctions.com.  The current catalog has the always popular $5 reserve vintage card auction. This particular one is unusually deep, with many better star cards, scarce cards and quality partial sets. We are currently accepting consignments for our next major auction.

Category of Items in the auction include: 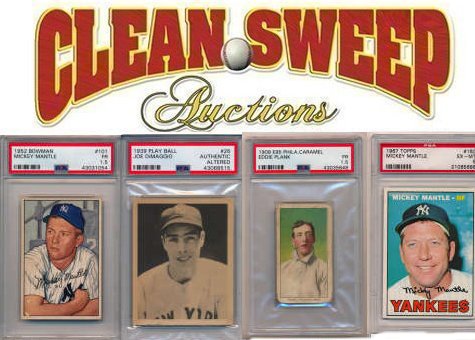 The auction opens with several 19th century lots, including two N28s, one N172 and several trade card and related lots. We have several T206 HOFers in mid-grade, an E98 Cy Young, several T202s, E106 American Caramels and a small run of E135 Collins McCarthy cards. There are many quality 1920s cards from various manufacturers and a terri c lot of 1933 Goudeys loaded with HOFers.

Cards continue with a solid 1934 Goudey common lot of 39 pieces, an R313 lot of 72 cards with 15 HOFers, a Wheaties Lou Gehrig, a 1939 Play Ball Joe DiMaggio and some very clean 1941 Double Plays including Ted Williams. 1941 Play Ball collectors will see a set missing only eight cards and many collector grade HOFers.

Post-war collectors will see a 1948 Leaf DiMaggio and strong selections of mid-grade 1950 and 1951 Bowmans. We have a run of low grade slabbed Mantle cards from 1952-1969 offered as single lots, these should be very popular.

1950s Topps collectors will see solid offerings of star cards, partial sets and high number lots from most of the 1950s sets. We have several of the very tough 1955 Postcard Back Exhibit cards in the auction, include HOFers Ashburn, Berra and Doby.

Pre-war baseball has new N162s, 1908 Rose Postcards, T206 HOFers, a broken T201 Double Folder set, the biggest run of 1914 B18 Blankets that we have had in some time, E120 American Caramels and 1933 DeLongs. We also have a tremendous variety of the very undervalued 1930s Wheaties issues.

The catalog concludes with a quality offering of vintage football and basketball cards. We have many 1948 Leaf football high numbers, a big run of 1952 Bowman Large football and key football Rookie Cards including 1957 Unitas and Hornung, 1958 Jim Brown, 1965 Namath and 1966 Dick Butkus/Gale Sayers.

Basketball offerings include a 1948 Bowman Mikan RC, a sharp 1961-2 Fleer Chamberlain In Action and a 1961 Kahns Jerry West.