The current auction is the always very popular $5 reserve card auction. We have decided to roll the September smaller auction into this auction, so there are a very large number of lots (1,365). Initial bids must be placed by 8 PM EST on the final day of the auction is Wednesday July 7, 2021.  To register and bid in the auction go to www.Cleansweepauctions.com.

The auction begins with a nice run of the cool, elusive and underrated 1909 Domino Discs. There are nearly 50 different, with several HOFers. The auction continues with a near-set of T201 Double Folders,all PSA graded. We have some unusual cards in this section, including a T209 Contentnea, D310 Pacific Coast Biscuit and a Pinkerton postcard. A nice run of 1914 B18 Blankets follows, this run is notable for many very clean brown infield variations. This auction provides a great opportunity to fill in these pricey holes in your B18 set at a potentially great price level.

Topps and Bowman collectors will see our usual mix of stars and clean commons, there is usually a partial set or high number run with each year. Other highlights include four 1953 Glendale Meats, a run of 1954 Dormand Postcards and a near-set of 1965 Topps. 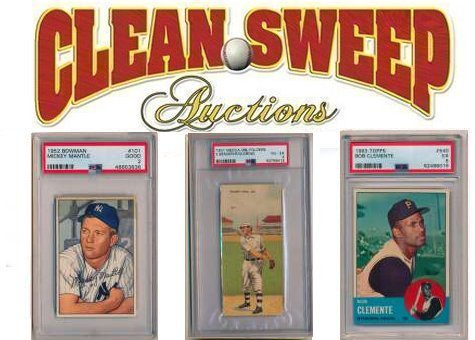 Oddball collectors will see some fun stuff, including four 1970 Transogram Mets full boxes and a 1971 Bazooka Mays full box. We have sharp Topps sets from 1974 to the modern era, many terrific Rookie and star card lots, several slabbed Mike Trout cards and a fine run of factory sets from 1986 to 2017.

Basketball card collectors will see many modern lots and singles. We have a nice selection of boxing cards, including many of the very undervalued 1920s exhibit cards and higher grade 1948 Leaf and 1951 Ringsides. Football card collectors will see an 1895 Mayo, a low grade 1950 Bowman lot with all of the key cards and some 1970s/1980s sets and singles. We also have some modern lots of football cards as well, including Peyton Manning and Tom Brady.

Our sale section has many new additions. We have many new single signed balls across most of the categories, signed 8×10 photos and a terrific run of gorgeous circa 1939 cuts of HOFers.

Football contains new 1948 Exhibits and a beautiful run of clean 1952 Bowman Small and 1953 Bowmans that are fresh to the hobby. There are also many new high grade cards from the mid-1950s through the 1970s. Basketball cards close out the catalog with many new 1970s and 1980s Rookie Cards, including a 1972 Topps Julius Erving and a 1980 Topps Bird Magic.

We are actively seeking out quality consignments for all of our future auctions, this may be the best market ever into which to sell your collections. We are also paying absolute top prices for quality inventory and collections. We have one million dollars in liquid funds available for direct purchases and cash advances for collections and inventory.