We are accepting consignments for our major auction ending in March/April 2020 right now. This auction is filling up with fresh and exciting material.  Our latest $5 reserve vintage card auction closes on Wednesday, February 26, 2020. Checking it at over 400+ lots, this is one of the strongest $5 reserve card auctions that we have offered.  To register and bid before the auction which closes on February 26, 2020 go to www.Cleansweepauctions.com.

The auction continues with a T200 Cleveland Team with Joe Jackson and a deep run of the elusive 1914 T222 Fatima issue. Other pre-war highlights include a run of 1929 Four-In-One Exhibits, three 1932 U.S. Caramels and four 1933 George C. Millers. 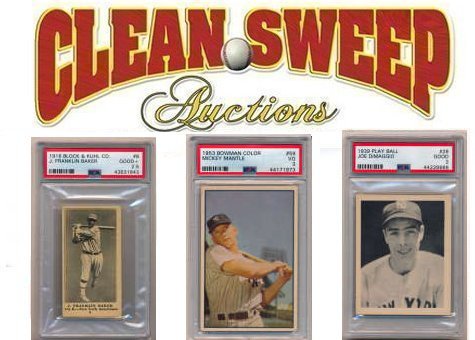 Post-war cards include quality 1948 Leaf and 1948 HOF Exhibit group lots, a 1948 Leaf Dom DiMaggio short-print, two 1949 Bowman lots and a Richie Ashburn PSA 2 Rookie Card and a nice selection of 1950-1952 Bowmans with many stars and some starter sets.

We have four lower grade 1951 Topps Team Cards, a run of collector grade 1952 Topps cards with some lots and a deep offering of 1953 Bowman Color with most of the key cards. Collectors of 1953 Topps cards will see some terrific common lots and a selection of star cards.

We have a run of the classic 1954 Dan Dee regional issue and a run of collector grade 1954 Topps key cards. 1955 Bowman and Topps collectors will see a Mantle, Koufax Rookie, Jackie Robinson and more. 1956 Topps collectors will see many of the key cards and a fine mid-grade near-set with 287 different cards, including some stars. 1957 Topps is very well represented here, with note to a Frank Robinson Rookie PSA 6 and a Brooks Robinson Rookie Card. There are also some fine group lots of 1957 Topps cards in the auction. Baseball closes out with 1958, 1959 Topps and various 1960s issues, with many key cards.

Boxing cards conclude the auction, these go back to 1910 and run through the classic 1951 Ringside set.

We have a terrific run of 1935 National Chicle football, with many high numbers and key cards. Football also has many new additions from the 1960s and 1970s. Basketball cards include a new 61-2 Fleer Wilt Chamberlain PSA 6 Rookie, and we close out the auction with extensive new offerings of vintage boxing and hockey cards.