Our current auction is our unique to the industry affordable all sports autograph, card and memorabilia auction; nearly all of the items in this auction have a retail value of $500 or less and low minimum bids. To register and bid before the auction which closes on April 21-22, 2021 go to www.Cleansweepauctions.com. 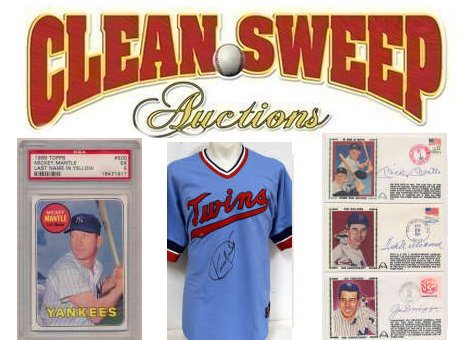 Categories of Items Include:

Day one is all about baseball autographs and baseball cards. We have autograph cards going back to the 1930s, with a signed Johnny Mize RC and a 1936 R313 Hank Greenberg. There is a run of slabbed Exhibit cards and other good content through the 1990s.

The auction continues with autographed flats, highlights include a nice lot of 1919 World Series players on 3x5s, a 1929 Philadelphia A’s business card with Mickey Cochrane, a circa 1954 Hank Aaron cut signature, two Roger Maris’s and a rare Ted Williams fountain pen cut. As always with these auctions, there is a deep selection of signed 8x10s; highlights here include a 1972 HOF Induction with Sandy Koufax, some beautiful circa 1969 Mets photos including Berra, Hodges and Seaver, four photos each with Hank Greenberg or Mickey Mantle and Satchel Paige. The section concludes with many group lots.

Collectors of single signed baseballs will see over 200 different lots. We have some unusual deceased singles, a wide selection of HOFer signed singles, several with desirable inscriptions and current stars as well. There are many quality group lots at the close. Multi-signed balls include a 1982 Red Sox Old Timers ball with Williams and Yaz, Brett/Pujols, HOF balls and Mantle/Banks. Team balls date from 1928 through 2014, there are many Red Sox and Tiger team balls, some All Star balls, some Championship balls and more. We have a wide offering of signed bats, with a 1953 Yankee and two Hank Aarons.

Baseball cards conclude day one. We have clean single cards from the 1950s through the 2000 era, including more modern cards and PSA 10s than we have ever offered. We have quality sets and partial sets from the 1960s forward, high grade 1970s sets and some good unopened product from the early 1980s.

Day two starts with basketball: we have cards from 1969 through the present, also with more modern cards than ever, there are clean sets and group lots. Basketball autograph collectors will see many signed basketballs, jerseys and photos, with some quality content. Boxing collectors will see several nice Ali signed items and vintage signed photos that go back to the 1930s.

Football is a major part of this auction; checking in at a full 20 pages, we have cards starting in the late 1940s going to the present day, and a world of autographed items. Highlights include many signed footballs, jerseys, full and mini helmets, Goal Line postcards and photos.

Baseball memorabilia nicely concludes the auction. We have a run of pubs and a wonderful selection of better World Series and other tickets that date back to the 1930s.