Clean Sweep Auctions Autograph and Memorabilia Auction is in progress and Closes August 2-3, 2017.  Visit our web site at www.csauctions.com to bid, register and view items.  You can also see items in person during the National Sports Collectors Convention at our booth #903-1002. Bid Now!

The auction has a particularly interesting mix of items. This is our unique to the industry affordable auto- graphs and memorabilia-only auction, nearly every lot has a retail value of $500 or less and very low minimum bids. We devoted the two covers to two of the real strengths of this auction, a terrific collection of classic Brooklyn Dodgers tickets, programs and pinbacks and a great collection of signed football helmets and mini-helmets, jerseys and memorabilia. Both categories are among the strongest we have ever offered in our auctions. 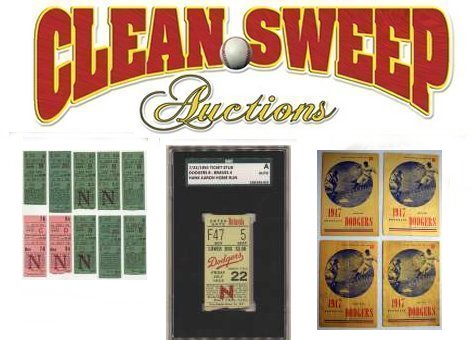 This is a 2-day auction, day one is baseball autographs, mainly flats. We have some better signed cards, including a 1965 Topps Roger Maris and many quality Red Sox signed cards, often in lots, including some of the key 1967 Red Sox cards. Perez Steele collectors will see a strong run of signed postcards, including George H.W. Bush, DiMaggio, Mantle, Ryan and Williams. We have a particularly deep offering of signed Yellow HOF Plaques, with many classic rarities, some nice group lots and keys including Combs, Crawford, Dean, Flick, Hafey, Hubbard, Mantle, Puckett, Schalk and Wheat.

Collectors of signed 8×10 photos can have a field day here, with no less than 133 different lots! We have some tougher 1933 Who’s Who signed pages, the usual run of classic HOFers and many tougher vintage signed photos. Collectors of 3x5s, GPCs and Cuts will see a wide range of vintage HOFers and scarcities, with note to Home Run Baker, Howie Fox, Don Hoak, Gil Hodges, Dummy Hoy, Connie Mack, Roger Maris, Walter O’Malley, Mel Ott, Dazzy Vance and Paul Waner.

Day two begins with basketball. We have a fine earlier John Havlicek signed Rookie Card, many vintage programs and some nice autographs. Boxing collectors will see several interesting Ali signed items and some unusual signed photos, including a 1927 Jack Dempsey and the very scarce Carlos Monzon.

Football is a vital part of this auction. We have a fresh run of high quality signed jerseys, including keys Bradshaw, Brown, Manning, Namath, Nitschke and Unitas. We have a run of signed full size helmets, with key HOFers Brown, Elway, Manning, Marino and Namath. We have an amazing single-owner collection of signed mini-helmets, checking in at a whopping 132 different lots, probably the most varied collection to ever appear at public auction. These were all obtained in person by a former Police Officer who worked at many football games over the past several decades. Football continues with some desirable vintage autographs, a quality collection of vintage helmets and some terrific pub lots from the 1930s through the 1950s.

Baseball memorabilia begins with a terrific offering of Brooklyn Dodgers material. We have an outstanding pin collection, spread out over 30 different lots. We continue with terrific lots of white-hot tickets, these are arranged in very manageable group lots by year from 1947 through 1956, with super low minimum bids. We also have a fine run of programs from the same years, and other related paper memorabilia.

Baseball memorabilia continues with many interesting non-Dodger tickets and memorabilia, going back to the 19th century. There are some game used jerseys, quality pennants, vintage signs and other interesting images. Baseball pubs go back to 1908, with note to World Series Programs from 1933-1967, yearbooks from 1941-1971 and the fourth issue of Baseball Magazine from 1908 among much more.

Autographed baseballs conclude the auction. We have an extremely detailed offering of deceased players, HOFers and current and recently retired star players. All of the usual suspects are here, and much more. Checking in at 249 lots, there are also some great value group lots at the close of this section. Team and multi-signed balls are also very strong here, with note to quality Cincinnati Reds team balls from 1941 through the Big Red Machine era, affordable 1946 and 1964 Cardinals team balls, 1969-1971 Mets signed balls and it concludes with quality All Star balls from 2007 and 2008.