Clean Sweep Auctions offers its Auction #239 – 2 Day Memorabilia Auction.  The auction is just a really fun auction, loaded with fresh and interesting material. This is our unique to the industry affordable autograph and memorabilia-only auction, with almost all lots carrying a retail value of $500 or less and very low minimum bids. This auction runs now through December 7-8, 2016. Bid, view and register for the auction at www.cleansweepauctions.com.

The auction has many items we rarely or have never featured. The auction is spread out over two days, day one is baseball autographs, mainly flats; day two covers all of the other sports, baseball memorabilia, baseball publications and single and team-signed baseballs.

Day one begins with a full 182 lots of signed cards. There are many, many gems here that have not seen the light of day in decades, with note to many scarcities and HOFer signed cards that go back to the 1920s. 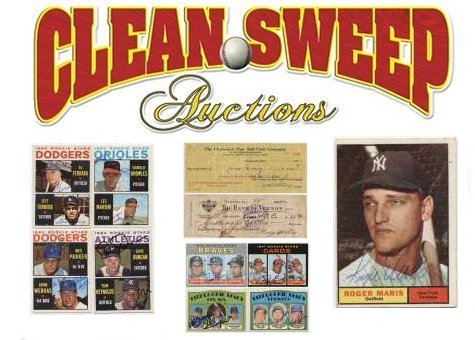 Also of note are some terrific group lots of multi-signed cards. Autographs continue with a great selection of HOF signed plaques, both gold and black/white with many key scarcities and classic HOFers. A deep run of signed Perez Steeles follows, stretching out over nearly 150 different lots.

Collectors of signed photographs should have a field day here, with almost 150 different lots of signed 8×10 photos, including rarities, key HOFers and some terrific group lots. We continue with some very high quality signed 1933 Who’s Who pages, with note to Chuck Klein and a new run of signed Burke photos, mainly 1930s Pirates but with some rarities.

We have a deeper selection than usual of 3x5s, also with a good mix of scarcities and desirable HOFers, presented over almost 80 different lots. Cuts and GPCs follow 3x5s, also with many very difficult signa­tures going back to the 1920s, key HOFers and quality group lots. If you are an advanced vintage autograph collector, you will really want to review these sections carefully. Day one concludes with many more signed photos, signed programs, signed checks, signed large prints and related items.

Day two starts with basketball. Highlights here include a superb Chicago Bulls signed team sheet with Michael Jordan and many 1970s ABA and earlier NBA programs. Boxing contains a few nice Ali signed items and a scarce 1948 Louis/Walcott program and other items. Football is always a big part of these auctions, checking in at over 80 lots, there are better vintage signed cards, nice signed photos, quality 1960s bobbin head dolls and some potentially rare vintage pennants among much more.

Baseball memorabilia is simply LOADED, one of our best offerings ever. We begin with a fresh run of game used New York Mets jerseys from the 1970s through 2000. The auction continues with fourteen different quality bobbin head dolls from the 1960s. We also offer our biggest selection ever of vintage pennants, nearly 50 lots in all, with some potentially very rare pennants that came from a fresh collection.

We continue with tickets, including a huge run of 1940s/1950s Brooklyn Dodger and New York Giants tickets offered as single lots and World Series tickets going back to the 1930s. Other memorabilia offerings include quality pinbacks dating to the early 1900s and a terrific 1965 Twins World Series banner.

Baseball pub collectors will see a mid-grade run of World Series programs from the 1930s through the 1960s, many Brooklyn Dodger yearbooks, some very nice 1950s All Star Game programs and other better programs and scorecards.

Signed baseballs nicely conclude the auctions. Another LOADED category, as much as we have offered in a single auction. There is a huge selection of deceased singles, a staggering run of over 100 different HOF signed balls, including many on desirable HOF balls or with better inscriptions.

Team and multi-signed baseballs include several better HOF and Old Timers balls, mid-grade vintage balls going back to the 1930s with some Championship balls, selected super high grade team balls from the 1950s and 1960s and better balls from the 1980s through 2000.

Now is a great time to place any initial bids as initial bids must be placed on any lot by 6 PM EST of the final day.  This auction runs now through December 7-8, 2016. Bid, view and register for the auction at www.cleansweepauctions.com.