Clean Sweep Auctions current auction is live on our website and closes on Wednesday October 7, 2015.  The current auction is a truly terrific auction, with all sorts of high points throughout the catalog. There is in fact so much quality material in this auction that this is the biggest catalog that we have ever produced.  The latest Clean Sweep auction features more than 600 lots. 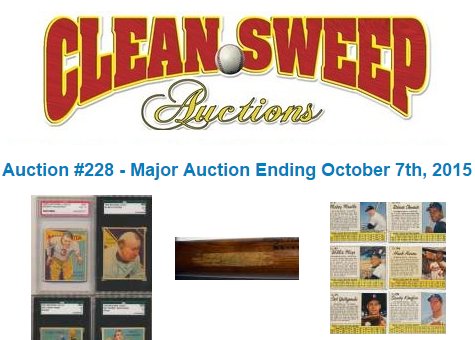 Baseball memorabilia continues with some wonderful pins going back to 1915, many rare unsigned baseballs and some game used equipment. Baseball pub collectors will see a fresh 1898 scorecard and a scorecard from Mickey Mantle’s first baseball game.

Baseball cards are a major part of this auction, and for good reason. We are proud to offer many great complete sets including N29 Allen & Ginter, E96 Philadelphia Caramel, the #2 PSA set of the 1936 R312 issue, an ultra-rare 1962 Jello set and a world class 1966 Topps set. There are several very high grade quality partial sets from the 1950s as well. Single cards include some great Old Judges, with both rarities and nice HOFers, a terrific run of the beautiful and undervalued 1899-1900 M101-1 Sporting News premiums, a clean run of newly graded T206 Southern Leaguers, three different L1 Leathers, the highest graded T3 Joe Tinker (SGC 7), an amazing 1916 Ferguson Bakery giant pennant premium, a 1935 Goudey uncut sheet, a few fine 1952 Topps cards, including Jim Hegan in a PSA 8 and Jackie Robinson in an SGC 7 holder and a solid selection of very high grade singles and Rookie Cards from the 1950s and the 1960s.

Baseball autographs are a huge part of this auction, and one of our best offerings ever. Notable items include a signed T206 card, terrific 1980s – 2000s (almost) fully signed Topps sets, a fantastic full 1933 Who’s Who book with 129 autographs, a gorgeous run of Burke photos signed in 1941 to Ken Keltner including a stunning Ted Williams from his greatest season, strong autographs from Babe Ruth and Lou Gehrig and much more.

Collectors of historical and entertainment autographs will see a terrific John Hancock signed document, in some ways the ultimate autograph. We also have a fresh collection of signed entertainment 3x5s and a fantastic selection of Norman Rockwell signed items that came from a life-long Rockwell collection that is fresh to market.

Basketball collectors will see sets from the 1960s and early 1970s, a pair of Shaq game shoes and a UDA LeBron James Cavaliers jersey. Boxing collectors will see many fine Ali items, including a rare 1970 on-site poster and several fine signed oversize pieces as well as a good early Floyd Mayweather wrapped signed game glove.
Football is another high point of the auction. We have a terrific near-set (31/36) of the key 1935 National Chicle set with a nice PSA 3 Bronko Nagurski, a good run of sets from the 1950s and 1960s and some extremely high grade 1966 Philadelphia cards in PSA 8 and 9 holders. We also have a full Super Bowl II ticket and many fine football autographed lots.

Collectors of multi-signed and team balls will see some wonderful 1960s era HOF induction type balls, some with Jackie Robinson, Jimmie Foxx and Satchel Paige. Two of my personal favorite signed balls in the auction are a 1924 Washington Senators reunion ball signed by Harry Truman and a 1923 Boston Red Sox team ball with the incredibly rare signature of Frank Chance. In addition, we have 1927 and 1928 Yankee team signed balls, terrific NL All Star team balls from 1950 and 1956, a fine 1956 Dodgers ball, six different balls with Roberto Clemente and three different balls with Thurman Munson, including a rare 1969 Syracuse Chiefs team ball.

These and hundreds of other lots across the major sports and into the non-sports category are available for bidding through Oct. 7. For more information, visit www.csauctions.com or call (888) 468-3397.

Bid, register and view the items at www.cleansweepauctions.com.