Checking in at over 700 lots, this Clean Sweep Auction features a great selection of graded cards all with a starting bid of $5. Bid, register and view the auction at www.cleansweepauctions.com. The auction concludes on July 1, 2015.   This one has a good varied selection of collector grade pre-war cards, some better grade 1950s cards and some quality common lots.

The auction begins in the 19th century with three Old Judges, an N28 Tim Keefe, four N284 Buchner Gold Coins and some types. There is a small selection of E90-1 American Caramels, a T206 Cobb Bat Off Shoulder and two small T206 lots. We have an E95 Mathewson in a 2, a run of T205s including a Joss, several collector grade T3 Turkey Reds and a fine run of the underrated 1914 Polo Grounds game cards, including Ty Cobb and Christy Mathewson. Pre-war baseball continues with a good run of 1928 Yuengling’s Ice Cream, with five HOFers including Rogers Hornsby and John McGraw. There are several lower grade 1933 Goudeys and a solid run of the exotic 1933 R337 Eclipse Import issue that is loaded with HOFers. Collectors of 1934 Goudeys and 1941 Double Plays will see a strong selection as well.

For Topps and Bowman collectors, there is a great selection of 1951 Bowmans, including a Whitey Ford Rookie in a PSA 5 holder, many of the star cards and three terrific group lots, with PSA 6s and 7s and also a strong common/minor star partial set. 1952 Topps collectors will see a lower grade group lot and also several high numbers. There is a 1952 Bowman Mantle in an SGC 4 holder and many 1952 Bowman high numbers, with note to a Mays. 1953 Bowman Color collectors will see many collector grade stars and high numbers. We have most of the key cards from the 1955 Topps set, including high numbers, as well as two quality common lots. 1956-1959 Topps cards conclude the auction, with a fine mix of clean mid-grade star cards and partial sets, ideal lots for collectors working on sets.

Our sale section is greatly expanded. We have an incredible selection of single signed baseballs, over 1,000 in total, with a huge offering of HOFers, retired star players and some exotic balls with interesting inscriptions. This section is well worth reviewing carefully if you collect single signed balls. Autographs continue with a strong selection of signed Yellow HOF Plaques, also a huge run of 8×10 photos, signed photos and postcards.

Baseball cards begin as always in the 19th century, with several new Old Judges, including a terrific King Kelly. This section continues with some new T206s, including a Nodgrass error and a Revelle with a Brown Hindu back, some new pre-war type cards and an expanded offering of oddball and regional baseball card issues. We picked up some clean 1952 Topps low numbers, all just graded by PSA, with note to an Al Rosen black back in a 7 and a Zernial in a 7. The catalog concludes with a greatly expanded offering of football, basketball and hockey cards. Collectors of boxing cards can check our online store for a good selection of 1951 Ringsides and some new oddball issues.

The auction concludes on July 1, 2015.  Bid at www.cleansweepauctions.com . 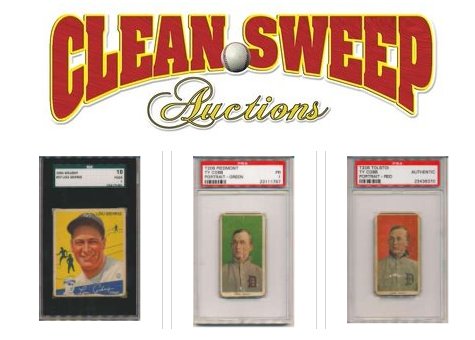