Clean Sweep Auctions $5 Reserve Auction is in progress and concludes on November 1, 2017.  Visit our web site at www.csauctions.com to bid, register and view items.   Our current catalog is loaded with fun, affordable cards and autographs in varying grades. We had an extraordinary National Convention, this catalog contains all sorts of neat goodies that we picked up at the show.

The auction in this catalog is the always popular $5 reserve vintage card auction. This auction starts with five 19th century baseball cards, including an N29 Buck Ewing. Other notable earlier cards include seven different E95 Philadelphia Caramels w/2 HOFers, a scarce Morton’s Bread pin and a run of T206s, mainly slabbed, with
20 HOFers. Highlights here include Walter Johnson, Christy Mathewson and Cy Young. There are a pair of collector grade E98s (Honus Wagner and Cy Young), a run of T201 Mecca Double Folders with all of the keys and five T3 Turkey Reds, mainly HOFers, in eminently affordable condition.

The auction continues with a solid run of 1939 R303-Bs including a Joe DiMaggio, a quality offering of mid-grade 1940 Play Balls with many high number HOFers and a nice run of 1941 Double Play and Play Balls including many of the key cards. 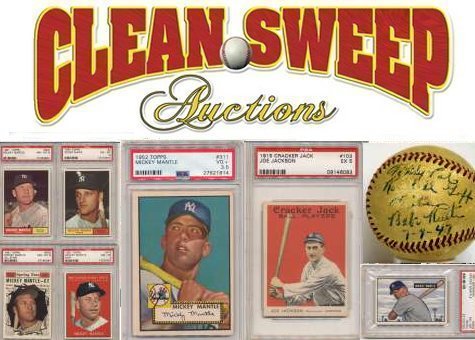 Topps and Bowman collectors will see a nice selection of 1953 Topps cards, including a Mantle and many clean single cards and lots, runs of 1954 New York Journal American and Red Hearts and strong offerings from 1954-1959 Topps cards. These offerings include Clemente and Koufax Rookie Cards, many Mantles and a 1957 Topps Brooks Robinson among much more. Baseball concludes with scattered cards from the 1960s through the 1980s.

In a first for this auction, we have a run of vintage basketball, these go back to 1948, ending with three clean 1970s Topps sets. The auction concludes with non-sports single cards dating back to the 19th century.

Our sale section has an expanded offering of baseball autographs, with many new single signed baseballs, Yellow HOF Plaques, 3x5s and 8×10 photos.

Baseball cards for sale include a new N28 Clarkson PSA 5, a D304 Brunners Bread Nap Lajoie and a huge offering of the very attractive 1916 BF2 Ferguson Bakery mini-pennants. We picked up many new collector grade 1933 Goudey Babe Ruth and Lou Gehrig cards, these have been white-hot in recent years; perhaps the most interesting card for sale is a rare and beautiful Overland Candy Lou Gehrig.

Oddball collectors will see extensive offerings of 1950s and 1960s Wilson, MacGregor and Spalding advisory photos. We have a new run of 1954 Dan Dees and many new oddball type-cards, including a 1958 Bell Brand Sandy Koufax PSA 5 and 1962 Canadian Post Cereal Roberto Clemente SGC 7.

Topps and Bowman collectors will see new additions in most years, newly broken sets include 1950 Bowman, 1952 Bowman and 1953 Bowman Color.

Football collectors will see a pair of very scarce 1935 Wheaties HOFers (Red Grange and Don Hutson) and star cards through 1974. Basketball and hockey close out the auction, with a solid selection of classic Rookie Cards and HOF singles.