The current Clean Sweep auction is now open and offers sports autographs and memorabilia at auction. Bid, register and view the auction at csauctions.com.  Bidding is in progress and runs through September 3, 2014.

The current auction ends on Wednesday September 3, just after Labor Day. This is an auction of higher grade single cards, sets and lots from all of the major sports, generally from 1960 to the present. We also have many better unopened baseball wax boxes and rack boxes from the very early 1980s. Finally, we have many huge wholesale/bulk lots containing thousands of cards per lot from the 1970s, ideal for dealers and value-oriented collectors.

The auction offers some really great lots of its kind. There are many, many high grade Near Mint and better vintage partial sets and complete sets of high quality.

The auction begins with basketball, there is a strong run of Near Mint and better sets from 1971/2 – 1979/80 as single lots. 1980s collectors will see a clean Near Mint Michael Jordan RC. Football comes next. We have many higher quality partial sets from the late 1950s through the 1970s, including a Post Cereal, Topps Baseball Bucks and various Fleer and Philadelphia issues. There are some good star cards, 1960 and 1970 Topps sets, a very high grade 1976 Topps set, as well as a Payton RC in a PSA Mint 9 o/c holder. Hockey collectors will some higher grade star cards from the 1950s through the early 1970s, a very fine Near Mint 7 Gretzky RC and high grade OPC and Topps Lemieux Rookies among much more. 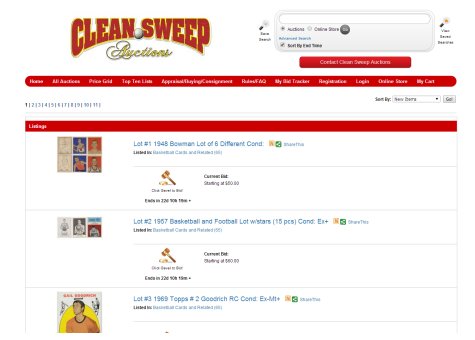