A mammoth auction for this style, this auction checks in at a whopping 1,880 lots. One of our unique to the industry affordable autograph and memorabilia-only auctions, this covers all of the major collected sports, mainly items with a retail value of $500 or less but there are several premium items included as well. Lots of fun collecting here! 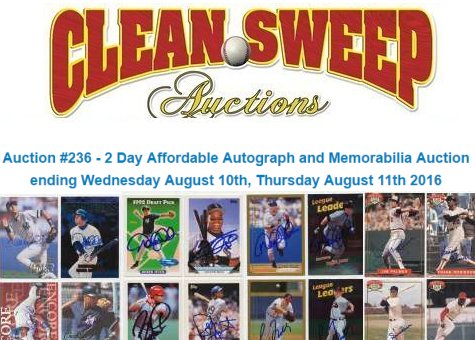 Day one is baseball autographs. We open with an extremely substantial offering of signed cards. So hot right now, this section has 272 lots and is almost an auction unto itself. We have better single cards going back to 1933 Goudey, many fine group lots and some outstanding Topps signed sets from the 1990s and 2000s era that are literally bursting with key stars and Rookie cards.

We continue with perhaps our deepest offering ever of signed 8×10 photos, checking in with nearly 200 different lots! Collectors will see key HOFers, fine group lots and many rarities, this is definitely a category to carefully review if you collect signed photos.

There are several terrific signed programs, including a 1952 Yankees signed yearbook, 1967 Braves and Reds vintage signed yearbooks, a Roger Maris signed 1972 All Star program and much more. 3×5 collectors will see many scarce autographs and several fine HOF signatures as well, this is a strong section as well. There also many interesting signed cuts, postcards and smaller size photos. We conclude day one with perhaps our biggest offering ever of signed bats, both HOFers and stars, with 40 total lots.

Baseball memorabilia is a real high point of this auction. We start with some very tough pins going back to the early 20th century, including rarities and key stars. These are fresh to the hobby. We continue with tickets, an exceptional offering, with note to final Brooklyn Dodger and New York Giants tickets, a Ted Williams final game ticket, a full first Mets home game ticket, first Shea Stadium ticket and many 300 win/500 home run tickets, some in lots. General baseball memorabilia includes a Culver photo of Chick Gandil, several interesting bats, vintage bobbin head dolls including several figural pieces, some rare postcards and more. Baseball publications include both variations of the first Brooklyn Dodger yearbook from 1941, a clean 1942 Dodger yearbook and several
Baseball Magazines from 1909-1910.

The auction ends on a very strong note with signed baseballs. Our selection of single signed balls may be our deepest ever, checking in at over 330 lots! We have many scarce deceased players from an amazing Red Sox collection we have been working with, one of the deepest offerings one will ever see of HOF singles, including many with HOF inscriptions and/or signed on HOF balls, many key current stars, some great group lots and a terrific run of political figures, celebrities and athletes from other sports on single signed baseballs.

Multi-signed balls include some nice HOF balls and many desirable balls. Team balls date from 1932-2007 with two 1970s Yankees balls with real Munsons, a beautiful 1996 Yankees team ball, several fine All Star balls from the last 25 years among much more.