Clean Sweep Auctions current auction, a loaded auction of affordable autographs and memorabilia, closes in on December 6-7. This will be the final auction of 2017.  This auction is our unique to the industry affordable autograph and memorabilia-only auction. Nearly all items have a retail value of $500 or less and have low minimum bids and no reserves. This auction has a wide variety of material that should be of interest to many collectors. 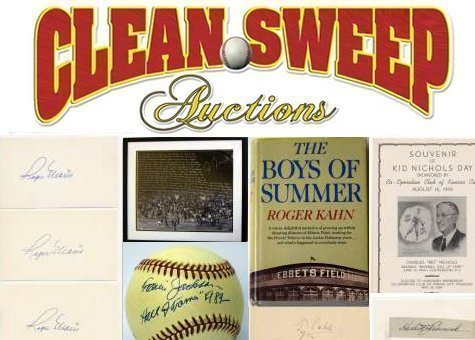 We have a circa 1939 Ted Williams signed autograph album page and some interesting signed checks, including Mickey Cochrane, George Grantham (D’54), Frank Kellert and Everett Purdy (D’51). We have a nice offering of documents and letters, including Eddie Collins, Earle Combs, Hank Greenberg, Carl Mays and Al Simmons. There are a few signed signed team sheets, including the 1940 Senators and the 1953 LA Dodgers.

We have some unusual signed cachets and a solid run of signed programs, many vintage, with with note to a 1995 Braves Team Signed S.I., Joe DiMaggio/Ted Williams signed gorgeous oversize calendar, a Gil Hodges 1951 program, a Connie Mack 1942 program and a Musial/Williams 1959 Sport Magazine. Day one concludes with a strong run of single signed baseballs, including a large run of high grade HOFer singles and scarce singles from Jimmy Carter, Bill Gates, Travis Jackson (HOF inscription), Dutch Leonard and Sadahara Oh.

Day two starts with multi and team-signed baseballs. Filling up eleven pages, this is a very substantial offering.

There are high grade vintage balls, including many ne Cincinnati Reds team balls from the 1940s through the 1970s, several Championship balls, All Star balls and HOF balls among so much more. The auction continues with basket- ball memorabilia, including a 1973 Kentucky Colonels signed mini ABA ball. Boxing has several interesting Ali signed items, a few scarce Carlos Monzon signed 8x10s and some interesting Ali paper items.

Football is a very substantial part of this auction, and is one of our best offerings ever. We have a terri c run of quali- ty HOFer signed 3x5s and GPCs, including two Jimmy Conzelmans, Turk Edwards, Joe Guyon, Arnie Herber, Link Lyman, Steve Owen and Emlen Tunnell. We have another large offering of signed mini-helmets, a good run
of signed footballs with key HOFers and 1968 Rams and 1982-3 Raiders team signed balls. There is a 1990 New York Giants signed framed jersey, some interesting full size helmets and many ne pub lots, including a full New York Jets yearbook run.

Baseball memorabilia closes out the auction very well. We begin with a substantial run of signed and game bats, with note to a terri c 1934 All Star Game story bat about Carl Hubbell, Berra/Larsen, Berra/Dickey, Campanella, Steinbrenner, a Yaz signed game bat and many fun Yankee themed bats. Baseball memorabilia continues with a huge run of tickets. These are fresh collections, with note to a wide variety of World Series tickets from the 1940s through the 1970s including the famous 1945 World Series Billy Goat game, and many scarce matched paired tickets from the Dodger and Giants from the 1940s and 1950s. There are many desirable rst-game stadium tickets from the 1960s and 1970s as well. We have some nice pennants from the 1940s and 1950s, several better pinbacks going back to the 1920s, a good run of mid-grade Hartland Statues and many unusual and interesting items, including several jerseys and other equipment-related it ems and 1960s nodders.