The current catalog features the always very popular $5 reserve vintage card auction. Our sale section is greatly expanded, with a wide variety of autographs and cards available for direct purchase.

The $5 auction might be our biggest one ever, it is loaded with over 900 lots. There are an amazing 450+ lots of pre-war baseball cards, quality partial sets from the 1950s and some better 1960s cards, including several Mantles and Seaver and Ryan Rookies.

The auction begins with a few 19th century cards, including two Old Judges, a Scaaps and an N184. There is a solid run of T206s in the auction, with many PSA and SGC 5 commons. There are some quality HOFers, including Johnson, Speaker and Young, plus a Brown Hindu back. Pre-war baseball continues with a solid run of mid-grade T201 Double Folders and a big run of higher grade 1914 B18 Blankets. There is also a fine selection of 1915 Cracker Jack commons (with a few HOFers) and 1916 BF2 Ferguson Pennants. 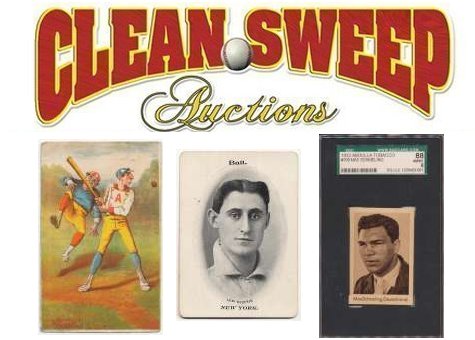 Post-war baseball includes collector grade keys from 1948 Bowman, a run of 1949 Bowmans with a Jackie Robinson and Duke Snider, 1950 Bowmans with a Ted Williams and 1951 Bowmans with Ford, Snider and Williams. We continue with a run of 1952 Bowmans with two Berras, 1952 Topps w/two Billy Martin Rookies and a deep run of mid-grade 1953 Bowman Colors with many keys. 1954 – 1959 Topps and Bowman cards contain many key Rookie Cards and stars, with note to 1954 Topps Aaron and Kaline Rookies, 1955 Topps Koufax Rookie, 1955 Bowman Mantle, 1956 Topps Mantle, 1957 Topps Brooks Robinson Rookie, 1958 Topps Mantle and Maris and a 1959 Topps Mantle 4.5. We have many collector-grade group lots from the 1950s and 1960s, plus several star cards from the 1960s. These cards include several Mantles and Seaver and Ryan Rookies.

Our sale catalog has a tremendous variety of new additions over the past few months. We have hundreds of new single signed baseballs, from scarce deceased singles to HOFers to retired stars, many new key Perez Steele signed postcards and many new signed 8x10s photos and postcards as well.

Newer additions to pre-war baseball cards include a run of 1913 National Game cards, many new 1933 and 1934 Goudey HOFers and 1939 and 1940 Play Ball HOFers with many high numbers. Oddball collectors will see many new 1947-66 Exhibits, a nice offering of 1952 Coke Tips, many of the scarce 1954 Dormand Postcards, and a new run of 1969 Topps White Letter variations.

The catalog concludes with expanded offerings of football, basketball and hockey cards.

We will be exhibiting at several shows over the next few months, please stop by and see us if you are in the area. As always, we are actively buying quality single items and collections outright, as well as accepting consignments for future auctions.