The current Clean Sweep Auctions is one of our most interesting to date. The auction has some very heavy hitting key lots, the most Babe Ruth cards we have ever had in one auction and the largest selection of Mickey Mantle, Jackie Robinson, Thurman Munson and Muhammed Ali autographs and memorabilia that we have ever offered. The baseball autograph section may well be the strongest offering we have had, the selections of basketball and boxing memorabilia are top notch as well. The auction closes with baseball memorabilia, with note to a strong selection of quality vintage game used bats and two World Series rings.  To register and bid before the auction closes on June 6, 2018 go to www.Cleansweepauctions.com.

This is followed with a beautiful 1933 Goudey Nap Lajoie PSA 3 as well as a very nice mid-grade 1933 Goudey set. A fresh PSA 2 1952 Topps Mickey Mantle follows, we have a Ned Hanlon signed contract from the 19th century, then a gorgeous and extremely rare 1964 Topps Giant Roberto Clemente signed card and finally two of the most interesting lots in the entire auction, a baseball and Alcoholics Anonymous book signed by Mickey Mantle to his roommate while in rehabilitation in 1994 for alcohol abuse, one year before he died. 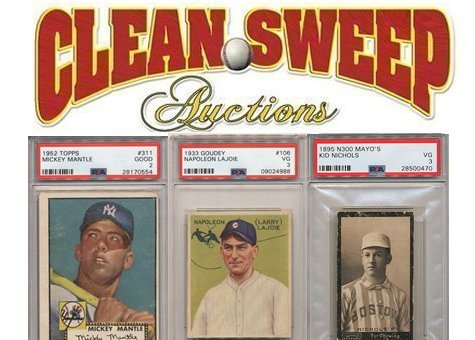 Our baseball card offerings include quality 19th century HOFers, a T3 Mathewson and a fine selection of Babe Ruth cards from the 1920s and 1930s. Baseball card sets include a 1922 E120 American Caramel and a high grade 1950 Bowman in addition to our usual offerings.

Baseball autographs are anchored by an amazing single-owner collection that we have been featuring in our 2018 auctions. Loaded with fascinating, often unique and just great items from classic HOF players and historical figures, there is so much great material here. Highlights include vintage signed High School yearbooks from Jackie Robinson, Mickey Mantle and Ted Williams, a Jackie Robinson autograph from 1939, a Thurman Munson autograph from 1969, an amazing 1952 Roy Campanella All Stars team signed photo, Lou Gehrig signed sheet music, a great Jackie Robinson 8×10, two Henry Chadwick signed items, a 1910 John McGraw letter and a pair of terrific 1969 Mets framed displays.

Our basketball selection is very deep here, including a fresh run of higher grade 1961-2 Fleers anchored by a Chamberlain Rookie, many terrific autographed items going back to the 1940s and some terrific Michael Jordan signed items. Boxing collectors will see many wonderful Cassius Clay and Ali items signed in the 1960s and autographs and memorabilia going back to the 19th century.

Golf collectors will see a terrific full run of Master’s Champions in several lots, with the key Claude Harmon signature.

Baseball memorabilia concludes the auction. We have game used bats from Jake Daubert, Charles Hollocher, Leonard Koenecke and Carl Yastrzemski. There is an incredible 1914 World Tour signed photo, a historic diary from Al Pratt taking credit for inventing the use of a glove in baseball, a scorebook from Babe Ruth’s first game as a Yankee in 1920, the actual 296 sign that hung in right field in Yankee Stadium for decades, a 1986 Mets World Series trophy and National League Champion World Series rings from the 1996 Braves and 2000 Mets.

Be sure to check out www.Cleansweepauctions.com to register and bid before the auction closes on June 6, 2018.