Clean Sweep Auctions current auction might the largest auction in terms of physical size of material that we have ever offered. Encompassing an enormous array of sports collectibles, this checks in at over 2,000 lots! The auction contains a wonderful single-owner consignment of unusual, interesting and rare signed autographs and memorabilia.  Visit our web site at www.cleansweepauctions.com to bid, register and view items.

Day one of the auction is baseball autographs. We open with a strong run of signed jerseys of HOFers and classic stars. We continue with a new run of circa 1939 signed Burke photos, all Dodger and Giants players. Autographed cards come next, with a 1928 Exhibit Ted Lyons, 1933 Goudey Joe Cronin, vintage 1939 R303-B Bob Feller and many interesting singles and lots from the 1950s through the 1980s, including desirable Rookie Cards.

Signed letters are a high point of this auction, there are over 40 different lots, with many unusual letters with striking content, including two from umpires critical of Jackie Robinson and a George Sisler letter regarding Walter O’Malley. 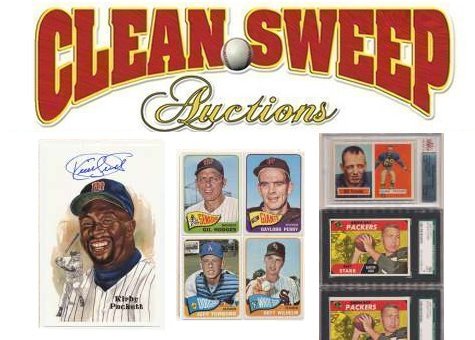 Autographed programs go back to 1929, with a 1936 Yankees program signed by Joe DiMaggio, a Jim Bottomley/Kiki Cuyler signed 1935 Reds program, a Willie Mays Rookie signed 1951 program and a Lee and Larry MacPhail signed program among so much more. Single signed baseballs close out day one very well. There is a wide variety of scarce deceased players, a particularly deep run of HOFers and many other interesting and unusual signed baseballs.

Day two begins with baseball cards. Checking in at just over 300 lots, these are mainly high grade single cards, group lots and sets from the 1960s through the 1980s. There are some good oddball lots and many sharp cards of key HOFers from the 1960s as well.

Basketball contains a great 1969 vintage UCLA Bruins program w/Alcindor, a vintage signed Chamberalin  1964/5 program, a great run of signed jerseys with Kobe Bryant, Steph Curry and Kevin Durant, a run of signed basketballs, some rare earlier autographs and some nice card lots. Boxing contains several fine Ali items and many interesting and unusual autographs and memorabilia that go back to the turn of the 20th century.

Football is a big part of the auction, with note to a strong run of signed jerseys and footballs, key autographs including the supremely rare Young Bussey (D’1945), a great Bert Bell signed large photo and a Johnny Blood McNally signed card among so much more. We have three Tiger Woods signed items for golf collectors and several fine signed hockey jerseys and pucks.

Baseball memorabilia is as deep as it has ever been, with items going back to the 19th century, including a great run of pennants, interesting vintage equipment, a run of better tickets and bobbin head dolls.

Team and multi-signed baseballs conclude the auction. A very substantial offering, there are over 100 lots. Balls here include popular team balls, some Championship balls, All Star balls, HOF Induction balls and much more.