We open 2022 with the most balanced auction that we have ever offered. Checking in at a record 1061 lots, the auction is filled with many terrific items that are fresh to market.  To register and bid before the auction which closes on February 2, 2022 go to www.Cleansweepauctions.com. 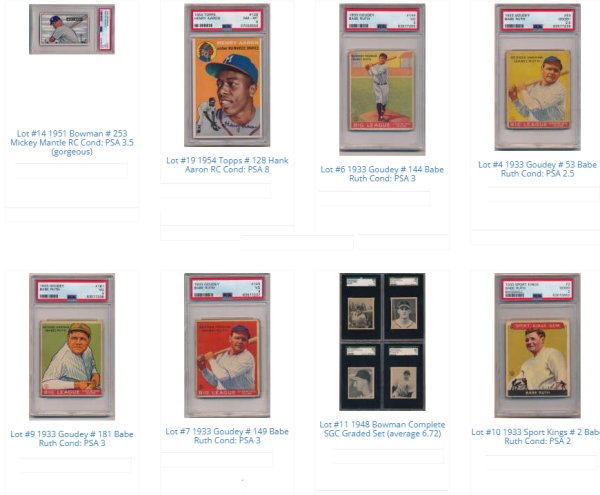 Other notable parts of this auction include a 1996 Topps Finest Refractor Complete Set, a run of 1903 W601s, a great run of over fifty different graded T3 Turkey Reds with many HOFers, 1952 Topps Jackie Robinson PSA 1.5 and Eddie Mathews PSA 1s that look so much nicer than their grades, 1954 Dan Dee Mickey Mantle PSA 6 st, a terrific Roger Maris graded collection with many rarities and higher grade cards and a 1982 Topps Traded Cal Ripken Rookie PSA 10.

Changing gears, we have a fresh larger collection of 1960s comic books offered in very manageable lots and a 1940 Superman set with the high numbers (all PSA graded) offered as single lots. For Star Wars fans, we have a 1977 Series Three box with thirty-one packs.

For collecors of the other sports, we have two fine mid-grade PSA Wilt Chamberlain Rookies, a 1972 Topps John Havlicek PSA 10 and a truly remarkable offering of original Topps production photos used for the 1975 and 1976 Topps basketball set. We also have a super rare 1976 Topps double-width vending box collection with razor sharp cards, a 1986 Clyde Drexler RC PSA 10, a 1986 Fleer basketball pack PSA 8 and a 2009 Bowman 1948 Blue Steph Curry RC PSA 8.