We open 2016 with one of our most exciting auctions ever. The centerpiece of this auction is a very high grade collection of sets and near-sets from 1939 through 1969. These are mostly from a single owner who worked tirelessly at shows in the 1990s and early 2000s, assembling all of these the old fashioned way, card-by-card. These are exceptionally well centered and fine sets, and perhaps best of all, have not been seen on the market until now and are fresh to the current hobby.  Bid, register and view the auction at www.cleansweepauctions.com. The auction concludes on February 3, 2016.   This one has a good varied selection of items for collectors. 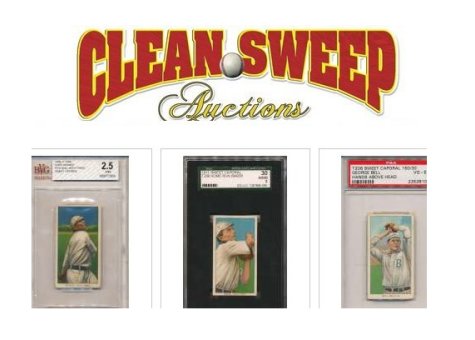 Baseball cards begin the auction, and frankly would be a high quality auction unto themselves.

For collectors of historical autographs, we have some great material. Offerings include a John Quincy Adams signed letter, an Andrew Jackson signed document, a stunning Abraham Lincoln autograph signed five days before he died, an amazing Eisenhower letter regarding his historic Atoms for Peace speech at the United Nations and a General Custer signed check display. Entertainment autographs include a stunning Elvis Presley signed 8×10 and more terrific Norman Rockwell signed flats.

Non-sports cards are a real strong point of this auction. We have several classic and important 1930s and 1940s gum sets, including a full 1933 Goudey Indian set, a 1938 Horrors of War, a 1940 Lone Ranger set and a 1941 Uncle Sam set with the rare high numbers among others.

Collectors from other sports will see some quality vintage basketball card sets and lots going back to 1948, two good Michael Jordan signed UDA items, many Ali signed items, a quality run of football sets including 1948 and 1950 Bowman and many key football vintage HOF autographs. Hockey collectors will see many mid and better grade sets from 1933 Ice King through 1966 Topps, including Bobby Hull and Bobby Orr Rookie Cards.

About Clean Sweep Auctions
Clean Sweep Auctions is the largest combination auctioneer and seller of vintage sports cards, autographs and memorabilia in the world. We both sell and auction items.  If you are looking to buy items for outright sale, click on our online store link above and you will find the largest selection in the world of old sports cards, autographed baseballs, vintage programs, tickets and much more.