Clean Sweep Auctions current major auction is in progress and closes on May 31, 2017. Initial bids must be placed by 6 PM EST on the final day of the auction, so now is a great time to place your initial bids. The auction is loaded with fresh and interesting material in all of the categories that we sell. Visit our web site at www.csauctions.com to bid, register and view items.

Printed catalogs are on the way to those on our mailing list, they can also be viewed as a PDF file here:

The current auction is among the most consistent that we have ever offered. We want to thank our many loyal and new consignors for providing us with a wide range of quality items throughout all of the areas in which we work.

We begin the auction with baseball autographs. We open with a fine offering of signed baseball letters, including Cap Anson, Eddie Collins (from 1910), Charles Comiskey (from 1919) and Walter Johnson (from 1928). Auto graphed 3x5s and related items include a fine Grover Cleveland Alexander, Abner Doubleday, a Mint 9 Jimmie Foxx, a superb Babe Ruth, Honus Wagner and Cy Young. Other special items in this category include a 1925 Walter Beall signed player contract, a 1958 Yogi Berra player contract and a superb Babe Ruth signed check. 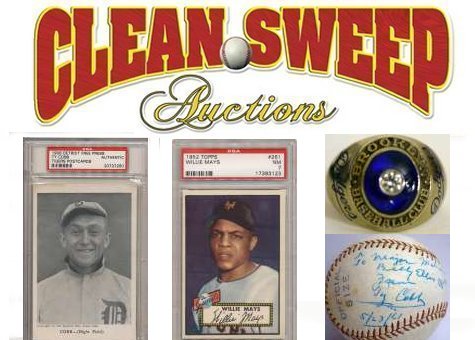 We have one of our largest offerings ever of Presidential and historical autographs, with Presidents going back to James Monroe. Highlights include a fine Grant letter, two Teddy Roosevelt signed items, checks signed by JFK and Marilyn Monroe, a Simon Bolivar document and Winston Churchill signed letterhead. Collectors of vintage Hollywood will have a field day here, with a mammoth 300 different lots almost entirely from an incredible signed-owner collection.

Hockey collectors will see a superb 1963/4 Parkhurst set, the #1 set on the SGC registry and Bobby Hull’s Canadian passport among other items.

We have some nice rings including a 1947 Brooklyn, 1979 Baltimore and Reggie Jackson and George Scott MLB Alumni rings. The final lot in the auction is a simply awesome true Yankee Stadium game used home plate from 2008, signed by the Core Four and two others!