Clean Sweep Auctions opens the auction with a run of thirty-three key lots. These start with a newly found ticket from Wilt Chamberlain’s one-hundred point game against the Knicks in 1962, arguably the single finest sports performance for one game in all of sports history.  Also incldued are interesting cards, autographs and memorabilia. The auction will end on Wednesday October 12, 2022.  A loaded auction, we have over 1,000 lots.  To register and bid go to www.Cleansweepauctions.com.

Ohter notable offerings in the auction include a strong run of 38 different N172 Old Judge cards including Anson, Clarkson, Ewing, Kelly and Ward. We have a gorgeous 1894 N142 Duke Cabinet of William Nash, T204 Eddie Cicotte PSA 5, three T206s with Carolina Brights backs and a Mathewson Portrait PSA 5. We have some terrific oversize and exhibit cards, including 1916 Fleishmann Bakery Casey Stengel SGC 1.5, 1921, 1922 Eastern Exhibit and 1925 Exhibit Ty Cobb cards, 1921 Exhibits of Hornsby and Johnson, 1926-29 Postcard Back Exhibit Gehrig among others.

There is a run of collector grade Babe Ruth and Lou Gehrig cards from the 1930s that will be very popular and many classic Rookie Cards and key HOF cards in higher grade from the 1940s through the current era.

For collectors of other sports, we have several Michael Jordan signed items, an incredible HOF centers signed basketball and fine basketball single cards and sets. Football collectors will see a fresh run of 1895 Mayos, classic HOF Rookies and many fine autographed items. Hockey collectors will see some nice items, including a 2005 Upper Deck Ovechkin RC PSA 10 and desirable sealed boxes and cases from the past 20 years.

Baseball memorabilia nicely closes out the auction. We have some key tickets, including 1956 Larsen Perfect Game PSA 3, 1960 World Series Game 7 and a 1961 Roger Maris 61st home run. There is some terrific memorabilia, including a 1955 New York Yankees two-sided jeweled charm, 1958 Yankees 14K gold pendant, two fine 1969 Mets jewelry pieces, 1975 Reds World Series trophy and some good equipment lots from the 1950s through the 1980s with bats, hats and jerseys. 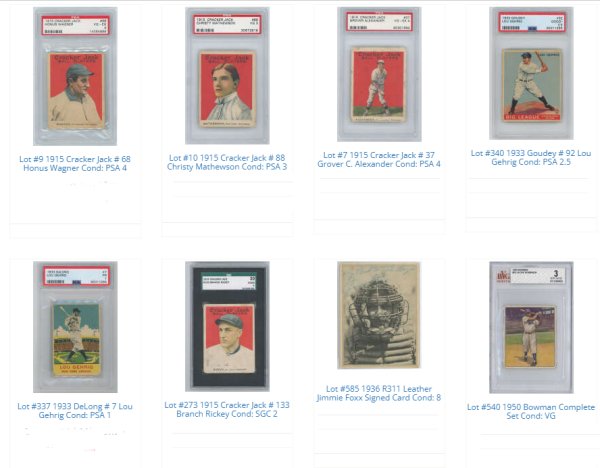