Checking in at over 900 lots, this is one of the biggest auctions of this kind that Clean Sweep Auctions has ever run. This auction is our most balanced ever, with terrific selections of baseball graded cards, complete sets, autographed flats, autographed baseballs and perhaps our best selection ever of baseball memorabilia. Bid, register and view the auction at www.cleansweepauctions.com.  The auction concludes January 28th.

Checking in at over 900 lots, this is one of the very biggest auctions of this kind that we have ever run. We want to of course thank our many loyal consignors for making this possible. This auction is our most balanced ever, with terrific selections of baseball graded cards, complete sets, autographed flats, autographed baseballs and perhaps our best selection ever of baseball memorabilia.

The auction begins with a huge run of 309 lots of graded single cards. This section includes some prewar rarities, several new T204 Ramlys including key HOFers, a good selection of T206s including three Ty Cobbs, two of which are 5s, and some rare backs. There is also a very nice M101-5 Shoeless Joe Jackson in an SGC 5. For post-war collectors, we have a large collection of PSA 8 Rookie Cards and stars, all fresh to market, assembled ungraded by a collector with a great eye. We have a 1952 Topps Mantle in a nice SGC 2 along with the other key high numbers. There is a brand new 1969 Topps Super set, recently graded, with a staggering 29 PSA 10s! Baseball card sets and lots include a full N28 Allen & Ginter, a collector grade near-set of 1933 Goudey, some very high grade Topps sets from 1961 – 1967 and some large lots of original Topps artwork from the 1980s.

Baseball autographs come next, also with 300 lots, a veritable auction unto itself. We start with autographed cards, including signed very-near Topps sets from 1974 and 1980 – 1982. One of the real high points of this auction is a truly remarkable collection of signed photos, almost all collected by a single owner for decades with a great eye. His focus was signed photos, especially 8x10s, and he really acquired some great pieces with signed 8x10s of Baker, Cobb, Foxx (Burke), Klem, Lajoie, Rickey, Ruth and so much more. There also many terrific lots of 8x10s from this collector. Collectors of 3x5s and cuts will see a fine run of 1927 Yankees autographs with the rarities, two Mint Babe Ruth autographs, a Christy Mathewson check and an amazing 1994 pre-Rookie Derek Jeter signed contract.

The auction ends very well with baseball memorabilia. Bats include single signed examples from DiMaggio and Mantle, a Derek Jeter gamer and Willie Randolph’s 2,000th hit bat. Rings include a real 1981 Yankees World Series and all four of Keith Hernandez’s All Star rings. We have a Pete Rose game used glove from 1970, many rare vintage pins, our best selection ever of quality 1960s bobbin head dolls and Kenesaw Mountain Landis’s wedding invitation from 1894. 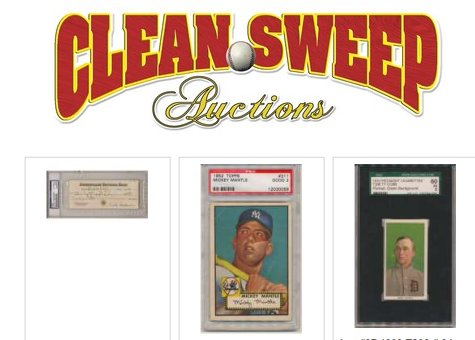