Our current auction is our unique to the industry affordable autograph and memorabilia auction; a great selection of affordable items with low minimum bids. To register and bid before the auction which closes on August 18-19, 2021 go to www.Cleansweepauctions.com. 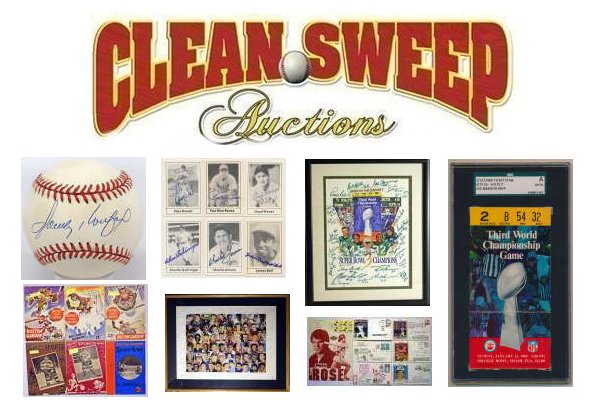 Day one is all about baseball autographs. We start with autographed cards, highlights include several key 1962 Mets signed cards, including Chacon, Hodges and Stengel. We have many signed key star cards, Rookie Cards and cards with desirable inscriptions in this section.

Signed photos are always a big part of these auctions, we have 8x10s of classic HOFers and stars, many interesting multi-signed photos, quality group lots and scarce signed photos from long deceased players. We have a run of 3x5s, with Harry Agganis, Roger Maris and two Satchel Paiges, many slabbed.

Collectors of signed equipment will see a solid run of signed jerseys. We also have signed hats including Ted Williams, a superb David Ortiz signed Twins jacket and more. There are some terrific signed large prints, including lithographs, 16×20 photos, team signed photos and related content. Collectors of

Day one closes out with a deep run of signed baseballs. Encompassing nearly 400 different lots, with a big run of HOF singles, several with inscriptions, deceased players, current stars including DeGrom, Judge and Kershaw and terrific value group lots. There are many very interesting multi and team signed baseballs, with classic HOFers, All Star Balls and popular teams.

Day two covers all of the other sports and concludes with baseball pubs and memorabilia. Basketball collectors will see signed jerseys including Bird and Russell, interesting signed basketballs, photos and prints and a 1970 NBA Finals game 6 ticket. Boxing collectors will see a 1910 Jeffries-Johnson ticket, many unusual signed items, a few better tickets, a beautiful Joe Frazier signed Everlast robe and more.

Football is a huge part of this auction. Checking in at nearly 250 lots, we have quality signed cards, including a deep run of the very popular 1974 and 1975 Fleer Immortal cards, all slabbed. There are signed footballs, full size helmets, jerseys, large prints and more. We also have a solid run of football programs going back to the 1930s, with a run of 1960s NFL Championship programs and several better tickets, including a Tom Brady University of Michigan first game ticket.

We have some nice golf signed items and memorabilia, with autographs and some key early Tiger Woods tickets. Hockey collectors will see an interesting Boston Bruins collection and many nice signed items.

We have more horse racing items than ever, with note to Kentucky Derby tickets from key races going back to 1930.

Baseball memorabilia is as deep a section as ever. We have a fresh collection of New York Mets game bats from a clubhouse person, signed bats, a fine run of tickets with many World Series tickets, pennants, pins, game used equipment and much more.

Baseball pubs include our usual runs of World Series programs, All Star Game programs, yearbooks and a run of unusual scorecards from the 1920s through the 1950s.

We are always accepting consignments for our next major auction. Fine consignments have been coming in every day, now is a great time to reach out to us about any items or collections that one is considering selling or pruning. We have loads of great cards, autographs and memorabilia rearing up and waiting to go for our next auction!