The current Clean Sweep auction is one of the very best we have offered. We have worked tirelessly for months putting this together. Yankee items are featured on our cover, this is the heart of the current auction. Checking in at 187 lots and spread out over 45 pages, this is really an auction unto itself. This is a deviation from our usual format, but we thought it would be fun to keep these items together. Mainly from an incredible single owner collection, this section is loaded with fresh, great and often rare material. To register and bid before the auction which closes on October 2, 2019 , 2019 go to www.Cleansweepauctions.com. 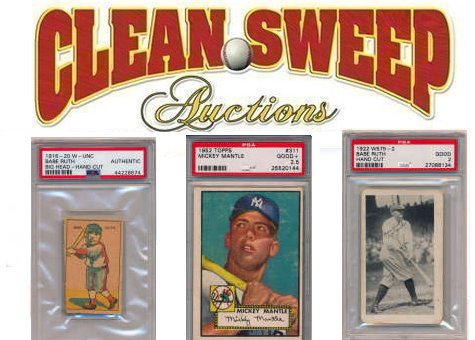 The selections of baseball cards are as extensive as we have ever had in one of these auctions. There are large selections of Old Judges (with some HOFers and Spotted Ties), T206s including three Cobbs, Demmitt and O’Hara, a fresh run of 52 Topps cards with a Mays SGC 5, sharp high numbers and an Eddie Mathews SGC 4. There are several very high quality 8s in this section, including a 1958 Topps Ted Williams and much more.

Baseball card sets and lots include a stunning 1914 B18 Blanket red in eld variation that is fresh to market and a nice offering of sets from the 1930s through the 1970s, with oddball sets and clean Topps and Bowmans.

Baseball autographs include some very tough signed cards going back to the 1920s, ne slabbed checks from Jackie Robinson and Honus Wagner, classic HOF autographed at items and many signed baseballs. The signed baseballs including some outstanding team and multi-signed baseballs from the 1950s and 1960s that came from the son of the Yankee trainer at the time.

Baseball memorabilia closes out the auction with some interesting game used jerseys and bats from a 1991 home run derby, a 1926 World Series program and a rare 1946 Exhibition game program from Jackie Robinson’s first appearance at Ebbett’s Field.