The current Clean Sweep Auction is in progress .   To register and bid before the auction which closes on September 4, 2019 go to www.Cleansweepauctions.com.  This auction features an amazing selection of High Grade and Odd Ball Cards generally from 1960 to the present. Checking in at over 500 lots, this is one of the best auctions of it’s kind that we have offered. 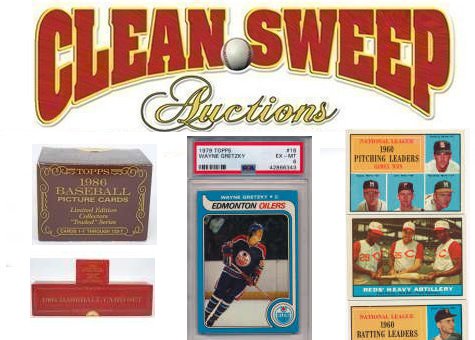 The auction continues with clean 1960s Topps stars and rookies, and also many very nice partial sets and high number lots. Other unusual issues include a lot of 1964 Mortinga Japanese postcards with Sadahara Oh and some fine Yankee team sets from the Salada, Topps and Coke Cap issues that you just never see.

For the 1980s to the current collector or dealer, we have some really nice lots that we hardly ever offer. Highlights include a fine run of 1984 – 1991 Topps Tiffany sets, 1988 Score Glossy set and traded, 1989 Bowman Tiffany, 1993-94 SP sets, some Finest lots and some good lots of unopened wax and factory sets.

Football collectors will see singles and lots going back to the 1940s, with key Rookie Cards of Dick Butkus, Gale Sayers, Brian Piccolo and Walter Payton among others.

Hockey closes out the auction with clean singles and sets from the 1960s through the late 1980s.

Our sale section contains a broad variety of new offerings. We have added hundreds of single signed baseballs to our inventory in recent months. Highlights include many tough deceased singles, a deep offering of HOFers and our best run in years of current stars, including Freeman, Kershaw, Kluber, Lindor and Trout.

Perez Steele collectors will see many new additions as well. We have a strong offering of signed 8×10 photos, with note to classic HOFers and some terrific multi-signed photos. Autographs conclude with many new 3x5s, postcards and cachets with strong content.

Baseball cards for sale begin as always in the 19th century. We have many beautiful N162 Goodwins, all non-baseball, many new 1916 BF2 Ferguson Bakery pennants and type-cards.

Topps and Bowman collectors will see a new 1951 Bowmn Mantle PSA 2, 1952 Topps Jackie Robinson, Campanella, Wilhelm and Mathews in 1.5 – 4 holders and many new sets. The catalog concludes with offerings of vintage football and basketball cards, with note to a new 1948 Bowman George Mikan Rookie Card.