The current Clean Sweep Auction is in progress .   To register and bid before the auction which closes on June 5, 2019 go to www.Cleansweepauctions.com.  This auction features a T206 set, two 1951 Mantle’s, one 1952 Mantle and outstanding autographs.

The current auction closes on Wednesday June 5 and has some interesting and exciting content. We start the auction with a fresh mid-grade near T206 set. From the same collection, we also have a T205 set, a partial T207 set and all manner of interesting tobacco and caramel cards through the 1930s, including E90-2 and E106 Honus Wagners. 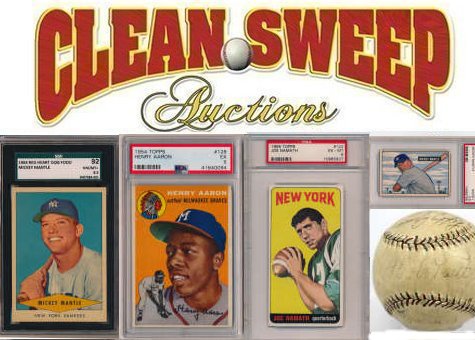 Baseball cards in this auction include the third and final part of the huge and significant collection of Old Judges that we obtained last summer, with note to another 25 HOFers/rarities as part of well over 100 different lots. Other card highlights include an E102 Cobb, several T206s with rare backs, including a Johnson Portrait and a Cy Young Portrait with brown Hindu backs, a Ty Cobb with a Sovereign 360 back, 1932 U.S. Caramels of Ty Cobb and Lou Gehrig, a key 1947 Bond Bread Jackie Robinson, a quality run of 1948 Leaf short-prints, a 1954 Wilson Weiner Gil Hodges PSA 7, a superb 1954 Dan Dee Mantle PSA 7, 1954 Red Heart Mantle SGC 8.5, a 1954 Topps Aaron Rookie PSA 5 and a 1956 Topps Clemente PSA 8.

Baseball card sets and lots include several tobacco lots including some fine lots at the end of the auction catalog that arrived just at our print deadline, with note to a T206 Cobb Red Background SGC 3.5, Cy Young Portrait PSA 3 and a lot of over 300 different T206s in collector grade.

Baseball autographs check in at over 100 lots and include many desirable signed card singles and sets, signed photos, letters and programs. Noteworthy items include a 1965 Yankees team sheet, a lot of 392 different NY Yankee signed 8x10s, a beautiful Mantle/Maris 8×10 and an amazing 16×20 signed by Mickey Mantle and Pete Rose to each other from Mantle’s restaurant. Signed baseballs include singles of Jimmie Foxx, Rogers Hornsby, Joe Page and Jackie Robinson. Team balls include 1928, 1934 and 1936 Yankee signed baseballs, and a truly rare 1946 Satchel Paige signed barnstorming tour ball.

Baseball memorabilia closes out the auction. Items here include a 1927 World Series program, first game programs for Jackie Robinson and Mickey Mantle, a beautiful 1969 Mets pendant given to the wife of a player and a terrific circa 1977 Yankees true game jacket.

Category of Items in the auction include:

We are current accepting consignments and buying items outright for our next major auction.