Clean Sweep All Sports Autograph and Memorabilia Auction – Closes In Just One Week on Wednesday April 6 and Thursday April 7. Our current auction is our unique to the business affordable all sports autograph and memorabilia-only auction. Almost all lots have a retail value of $500 or less and very low minimum bids.

See us in Portland, Maine this weekend April 2-3 buying outright for big prices and accepting consignments. Our show will be at the Doubletree Hotel right by the Maine mall next to I-95. We will have free auction catalogs available and a sampling of our inventory (including some key items). If anyone wants to see a particular item from our inventory, please call or email us right away.

Our current auction is our unique to the industry affordable all sports autograph and memorabilia auction.

Nearly all items have a retail value of $500 or less and carry very low minimum bids. This auction runs over two days. Day one is all about baseball autographs.

We begin with a strong selection of signed 1933 Who’s Who pages. These are generally gorgeous fountain pen signatures from 1933, with some notable pieces, including Moe Berg, Jim Bottomley, the rare Bill Cissell, Bill Klem, Connie Mack, Rabbit Maranville and Tom Yawkey with Eddie Collins among others. 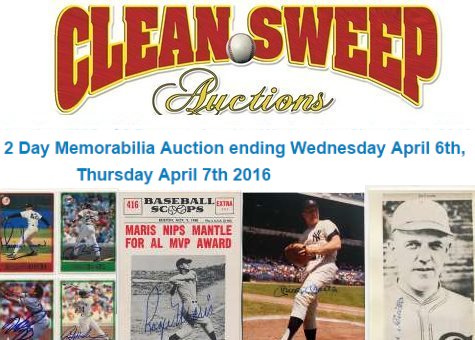 The auction continues with an especially deep selection of signed cards. We have a rare 1933 Goudey Johnny Welch (D’1940) signed card, a solid selection of popular 1950s Topps and Bowman signed cards including scarcities, several Nellie Fox and Elston Howard and Ken Boyer signed cards, two superb Roger Maris signed cards, a terrific pair of 1976 and 1977 Topps Lyman Bostock signed cards and many nice HOFer and other group lots from the 1980s.

Signed 8×10 photos are a real high point of this auction. Among our strongest offerings ever, there are many beautiful images of classic HOFers like Joe DiMaggio, Mickey Mantle and Ted Williams as well as a terrific 1938 All Star Game 8×10, a scarce 1967 Red Sox UDA print with Ted Williams, many fine multi-player signed images, a spotless Hank Greenberg, a scarce Earle Combs, a very scarce Harry Hooper and many fine group lots.

We have an exceptionally deep selection of signed 3x5s, cuts and related, including several autographs that are so rare that JSA could not even find an example to compare against! Selected highlights include Fred Clarke, Pat Collins, Bobby Lowe, Roger Maris, a vintage Willie Mays, Ed Walsh and a 1940s Ted Williams. Rare cuts include Buck Herzog, Herb Pennock and George Stallings among many others. We have some nice Black and White HOF signed plaques and a strong offering of signed Yellow HOF Plaques.

Collectors of oversize signed photos will see many terrific Mickey Mantle pieces and a very nice DiMaggio/Williams 16×20 among others. Signed letters are a real highpoint of this auction. We have many letters with utterly fascinating content from various 1920s and 1930s New York Giants, this is really a section to review carefully as letters of this quality hardly ever come to market.

Day two begins with some fine basketball autographed items. Highlights include two quality early 1990s Boston Celtics team signed basketballs, both with Reggie Lewis and one with Larry Bird, several period Bill Russell autographs and a simply wonderful selection of 1940s NBA programs and better NBA and ABA programs from the 1960s and 1970s, several of which are period signed and in their own section. This type of material is very scarce. Boxing collectors will see several nice Ali items as always, as well as some scarce signed photos and some good group lots.

Football is very strong in this auction, with note to a strong selection of quality HOF signed cards from the 1970s and 1980s, several better 3x5s, a run of signed helmets and many fine oversize items. Hockey is stronger than usual, with some nice signed hockey sticks, a run of signed pucks and many clean photos and cards signed by classic HOFers.

Baseball memorabilia is another strong point of this auction. We have a wonderful selection of pinbacks dating back to the 1920s, both player and team pins, with some pins that are likely rare. We have a solid offering of quality vintage baseball tickets, including many very high grade full tickets from the late 1960s and early 1970s. We also have desirable black bats from the 1974 All Star Game and 1978 Yankees, some better early postcards and other items.

Baseball pub collectors will see the usual selection of World Series programs, All Star Game programs and team yearbooks among other items.

We are currently actively seeking out high quality consignments for our next major auction in late May. Fine items already in this auction include perhaps the finest collection of post-war oddball and regional baseball card issues, mainly complete sets, including a 1963 Colt 45s Bateman in a PSA 7, amazing early autographs, a 1999 New York Yankees World Series ring and much more. Please email or call us with any items you might have for the auction.

Prices have NEVER BEEN Better for top material.

Initial bids must be placed by 6 PM EST on each day. Bidders who bid on 10 or more lots PER DAY can bid on any lot that night. Now is a great time to place your initial bids so you are not shut out of this fun auction.   Bid, view and register for the auction at www.cleansweepauctions.com.