bidding is now live. The auction is view-able and available for bidding at www.collectauctions.com/catalog.aspx. There are more than 800 lots of vintage sports cards and sets; signed baseballs, photos, jerseys and bats; an unparalleled selection of vending, cello and wax boxes; a huge selection signed cards and sets; and some amazing Lefty Grove items from the son of one of Grove’s best friends after his playing days. Bidding ends Thursday, December 4 at 9:00 p.m. CST (10:00 EST).

If you aren’t registered, you must do so before bidding. This can be done clicking the “register” link in the top right corner of our website. Thank you and good luck.

The Lefty Grove items are highlighted by the actual ball that Grove used for the first pitch of Game 4 of the 1972 World Series. Grove signed the ball and added “First ball thrown out in the 4 game of World Series 1972 by Lefty Grove.” There’s also a single-signed OAL Grove baseball; five different multi-signed HOFer baseballs from various Hall of Fame inductions; a Lefty Grove signature model 1961-63 Old Timers game-used Louisville Slugger bat authenticated by PSA/DNA; 1971 All-Star Game glass pitcher and tray presented to Grove; and a set of four 1973 Old Timers glasses given to Grove. 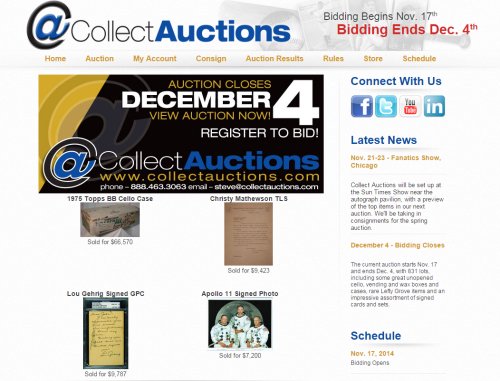