Collect Auctions current auction ends Thursday, November 29 in Collect Auctions latest sale, with everything from Babe Ruth and Lou Gehrig to John McGraw and Cy Young. Virtually every attainable Hall of Famer has a signature in the auction, with many coming from a single collector, who meticulously assembled a collection from the first HOF induction up through Mickey Mantle (1974). Many of the signatures are very high-end examples. 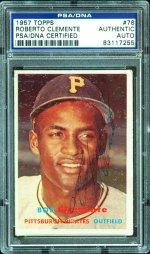 The auction is also loaded with some amazing unopened material, led by a 1972 Topps Baseball Series 5/6 wax box and a 1973 Topps Baseball

Bidders can register at www.collectauctions.com and clicking “Register” in the top right corner or call 888-463-3063 with questions.