“The last time I knew of a sealed 1986-87 Fleer case hitting the market was in the late 1990s. I haven’t handled a sealed case since the late 80’s and didn’t think one still existed,’’ said Steve Hart, owner of Baseball Card Exchange. “My estimate for this truly rare, possibly one-of-a-kind item, would be well over $1 million dollars. Very exciting to see this hit the open auction market!” 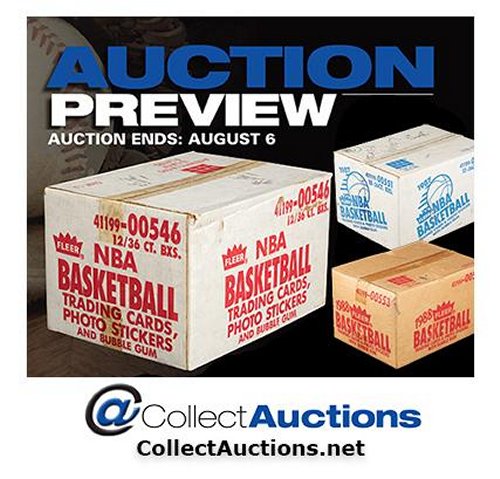 The Fleer 1986-87 NBA trading card set is universally considered one of the most important and sought after sets of all-time. The list of 1986-87 Fleer Basketball Rookie Cards is one of the strongest ever with more than 40 Michael Jordan Rookie Cards in this case. It also includes RCs of Hall of Famers like Karl Malone, Hakeem Olajuwon, Charles Barkley and Patrick Ewing, to name just a few.

Bidding ends Thursday, August 6 at 9:00 p.m. CST (10:00 EST).  To bid online, visit www.CollectAuctions.net. There are more than 1,000 lots of vintage sports cards and sets; what we believe is the strongest unopened lineup any auction house has ever offered, led by an unopened case of 1986-87 Fleer Basketball, along with many other vending, cello and wax boxes, unopened cases and vintage PSA-graded packs; all of the early Star Co. Michael Jordan singles; a handful of impressive PSA Registry sets, including 1969-70 Topps Basketball (No. 20), 1959 Fleer Ted Williams (No. 15) and 1957 Topps Football (No. 28); and much more. Bidding ends Thursday, August 6 at 9:00 p.m. CST (10:00 EST).

About Collect Auctions:
Collect Auctions is a premier auction house of sports collectibles and autographs from all collectible areas. They are best known for unopened products, including wax, cello, rack and vending boxes, along with signed trading cards and graded vintage cards. The business is located in central Wisconsin and was launched in 2011.