Collectable will be offering shares of a rare 1914 Baltimore News Babe Ruth Pre- Rookie Card – one of the rarest collectibles in existence. The card, which was acquired by an unnamed purchaser for a record-breaking price, will be displayed at the Babe Ruth Museum in Baltimore, MD, and offered on Collectable for $3 per share at a valuation just north of $6 million.

The 1914 Baltimore News issue is considered one of the ultimate assets in the entire sports collectibles industry. With fewer than ten in existence, this recent acquisition is the first involving the card since 2013. The acquisition broke the previous $5.2 million record that was set by a 1952 Mickey Mantle Card and 2003 LeBron James Rookie Card, confirming it as the most expensive purchase in sports card history.

“Today’s announcement represents not only a record price for a sports card, but also a historic and seismic moment for the sports collectibles industry. For the first time in history, via Collectable, collectors and sports fans of ALL income brackets will be able to co-own this record setting asset”, said Ezra Levine, CEO of Collectable. “We continue to see tremendous excitement for rare and exciting pieces of sports history, and we’re thrilled that today’s announcement showcases the power of fractional ownership to democratize and modernize our special industry.”

Graded an SGC 3, this card is the rarest and most valuable Babe Ruth card in existence, and is considered his true Minor League rookie card. This is the second highest graded example, only behind one graded a 4. Ruth’s Major League rookie cards were printed in 1916, and while tremendously coveted and valuable, are far more available than this 1914 Minor League version. 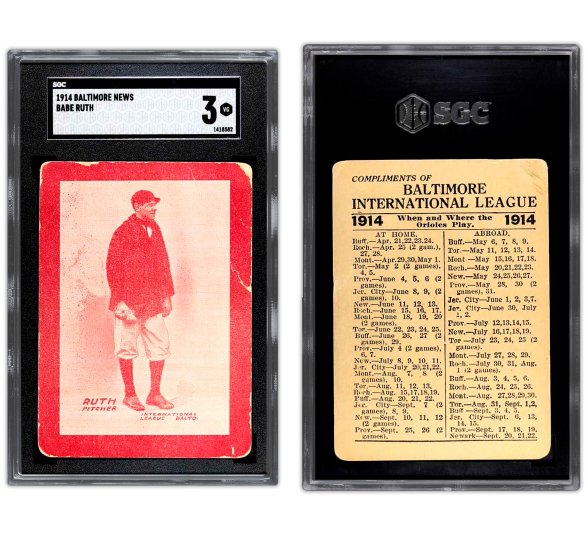 For context, there are approximately 60 Honus Wagner T206 cards in circulation including three that have been available to purchase publicly this year. In comparison, there have been no sales of this Babe Ruth Baltimore News card since 2013. Thus the rarity and exclusivity of this Baltimore News Ruth card cannot be overestimated.

For 23 years the card has been showcased at the Babe Ruth Museum in Baltimore, MD, where it will remain in a newly created special exhibit showcase for shareholders to be able to visit their asset in person.

“The Babe Ruth Birthplace and Museum celebrates and preserves the legacy of baseball’s greatest star, George Herman ‘Babe’ Ruth,” said Shawn Herne, Executive Director of the Babe Ruth Museum. “This incredibly generous offer to exhibit Ruth’s 1914 Orioles’ rookie card enables the museum to offer visitors the unique opportunity to experience -up close and personal- the Mona Lisa of baseball cards, and to further appreciate Ruth’s continuing impact on the game, and on our society, as an American cultural icon.”

Babe Ruth, nicknamed “The Bambino” and “The Sultan of Swat”, is considered baseball’s first great slugger and the most celebrated athlete of his time. He won 7 World Series championships and was inducted into baseball’s Hall of Fame, Major League Baseball’s All- Century Team, and All-Time Team. His career spanned 22 seasons, from 1914 through 1935, beginning as a star left-handed pitcher for the Boston Red Sox. Yet he achieved his greatest fame as a slugging outfielder for the New York Yankees. Ruth established many MLB batting (and some pitching) records, including career home runs (714), runs batted in (RBIs) (2,213), bases on balls (2,062), slugging percentage (.690), and on-base plus slugging (OPS) (1.164). Ruth is regarded as one of the greatest sports heroes in American culture.