Classic Auctions in honored to have been chosen to sell some important items from the Barry Meisel personal collection.  Instrumental to the hobby as one of the founders of the MeiGray Group in 1997, a hobby entity paramount in the authentication of game-worn jerseys and equipment, pioneer collector Barry Meisel enjoyed almost two decades as a successful sports journalist. Beginning with his days interning for the Binghamton Evening Press while a senior in college, Meisel explains how his passion for collecting was fueled.

“My plan was to get a game-worn jersey for every team I covered once I became a pro hockey writer. I got a Barons, then a Broome Dusters, Binghamton Whalers, New Jersey Devils, New York Islanders, New York Rangers. It was the late ’80s. My first career was born. From the Binghamton Press and Sun-Bulletin to the Morristown, NJ, Daily Record, to the New York Daily News”.

In his dozen years with the New York Daily News, Meisel covered the New York Islanders, New York Rangers, New Jersey Devils and New York Giants. He also spent the early-1990s serving as the News’ investigative sports reporter, with additional time as a columnist for The Hockey News (1982-90) and The New York Giants Newsweekly (1990-96), with a few book authored including ‘Losing the Edge: The Rise and Fall of the Stanley Cup Champion New York Rangers’. Despite building a vast and encompassing grouping of items, Meisel notes,

“I have my favorites. The Scotty Press that still sits in my home office. My 1983-84 Detroit Red Wings Ken Holland, the minor-league goalie in Binghamton who became a lifelong friend, and who had a cup of NHL coffee before becoming a Hall of Fame General Manager.

And my 1994 Stanley Cup Finals New York Rangers white Craig MacTavish, who was wearing this jersey in Game 7 at Madison Square Garden on June 14, 1994. MacT knocked the final faceoff into the corner with 1.6 seconds left on a 54-year Jinx, the night the Rangers allowed the Monster of MSG to one day Die in Peace. This jersey is on display at the Garden, to remind every Blue Seater from old Section 433 that the wait was worth it”. 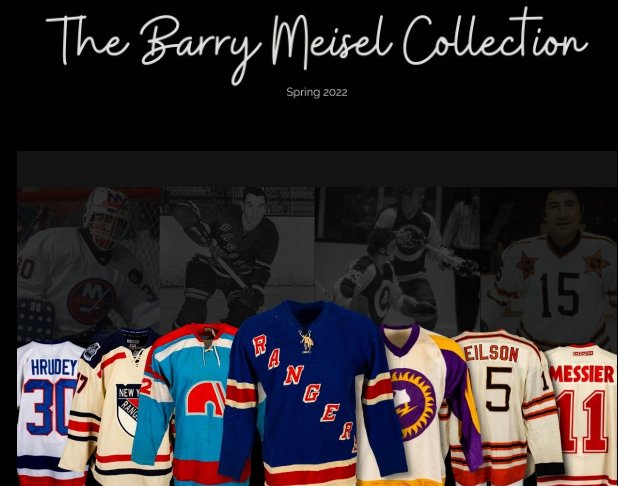 As always, we hope these long-loved treasures find new appreciative collectors, with Meisel stating it best, “It’s time for Classic Auctions and my good friend Marc Juteau to help me find my gamers new homes. Time for others to enjoy the greatest hobby alive.”

The Barry Meisel Collection will be available in our Spring 2022 Auction.