Rich Gannon collects things. Not football things, because the one-time most valuable player in the National Football League has plenty of those things: the game-worn jerseys and helmets and cleats, the playbooks, the game balls and other keepsakes accrued during a 17-year career that included one trip to the Super Bowl and four to the Pro Bowl. Instead, he collects antique advertising material: “neon signs, Coke signs, porcelain signs.”  Some 50 lots from Gannon’s estimable collection are featured in Heritage Auctions’ Nov. 17-19 Fall Sports Catalog Signature® Auction, almost every item signed and annotated by the man who took the Raiders to Super Bowl XXXVII.

And, as a collector, he knows well the reluctance – the resistance – that comes with parting with a piece.

“If you’re a collector, it’s in your blood,” says the man who suited up as a Minnesota Viking, a Washington Redskin and a Kansas City Chief before finding success and stardom as an Oakland Raider. “If you’re a collector, you never want to sell anything. For me, the fun part was the hunt – going to a swamp meet, an auction, going through someone’s collection. To me, that’s a lot of fun. It’s about going to shows with buddies, about making connections.”

Only now has Gannon, long a CBS broadcaster, decided to part with some of the most essential pieces of his collection that tell the story of his long, often torturous sojourn from clipboard-toting backup to league MVP.

Gannon says he’d never thought about auctioning his collection until he approached Heritage about offering items belonging to his father-in-law, Minnesota Vikings great Bill “Boom Boom” Brown – a Super Bowl champ, a member of the Vikings’ Ring of Honor and, like his son-in-law, a four-time Pro Bowler. Among his special offerings: a Vikings helmet the running back wore from 1963-1965, the golden helmet with the NFL shield worn during those Pro Bowl games and game-worn jerseys bearing the hallmarks of a warrior.

“He was the toughest football player I ever knew,” says Gannon of the man nicknamed “Boom Boom” because of his relentless, attacking running style. “I remember watching him when I was a kid – long before I knew his daughter – and I will always remember how hard a guy he was. He was tough, no-nonsense – very much a ‘three yards and a cloud of dust’ guy. He dented helmets. He cracked them. He broke them. And those jerseys were iconic – those colors, those rips, those tears. They are all really cool pieces.” 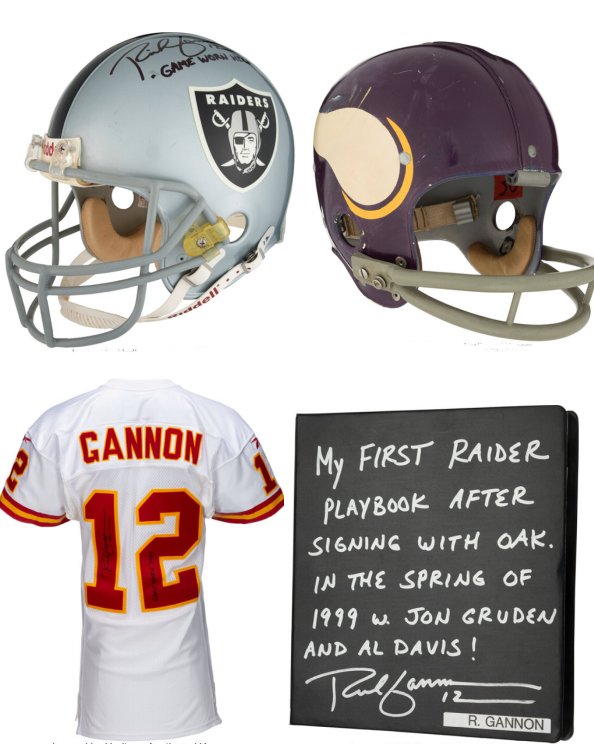 So, too, are Gannon’s, which combined tell the story of the rare journeyman who became a star.

Drafted in 1987 by the New England Patriots, who tried to turn him into anything but the star quarterback he’d been in high school and college, Gannon was traded to the Vikings, where he served as Wade Wilson’s backup – until finally getting his shot as a 12-game starter in the 1990 season. This auction includes a game-worn helmet from that very season.

“I will never forget how special it was for me to put that Vikings helmet on,” Gannon says. “As a little kid, all I wanted to be was an NFL quarterback and to earn that. I got a chance to make the team, wear the uniform and wear it proudly – then make some other teams. That is what is so special and unique about this helmet and this collection: It’s not the items. It’s what went into earning them and representing those teams.”

One of those teams was the Kanas City Chiefs, where Gannon’s career was reborn thanks to a young quarterbacks coach named Mike McCarthy, now the head coach of the Dallas Cowboys. In between Minnesota and Kansas City, Gannon was a Redskins backup – until suffering a shoulder injury that might have ended his career had the Chiefs not taken a chance on Gannon and made him Elvis Grbac and Steve Bono’s backup.

After an injury to Grbac during the 1997 season, Gannon became the Chiefs’ starter and a fan favorite before signing with the Raiders in February 1999 as a free agent. With Oakland, he led the team to the playoffs in three consecutive seasons and a Super Bowl – all thanks to McCarthy, who, he says, “did more for my career than anyone in my career. When I came there I was out of football. Nobody wanted to touch me, but when I left and went to the join Jon Gruden’s Raiders, I was teed up and ready to go. I went to four Pro Bowls because of Mike.”

This auction includes several signed and game-worn jerseys and signed game balls from Gannon’s tenure with the Chiefs. But, of course, here, too, are cherished keepsakes from his celebrated tenure with the Raiders – including, of course, a game-worn helmet from the 2003-04 season, his final in the NFL. He has also included four Pro Bowl helmets signed by some of his legendary teammates, among them: Peyton Manning, Junior Seau, Tony Gonzalez, Tim Brown, Hines Ward, Jerry Rice and Charles Woodson. There are game-worn jerseys, too, and playbooks and even a Betamax machine gifted to him by owner Al Davis, who would ask Gannon in retirement to review game tapes. On each item, Gannon has written a few words that help tell the story – his story.

“I wanted to explain why these are personal things to me,” he says. “I lived with that playbook, for instance: I took it to the hotel, on the road, took it home. There are notes in there I wrote – some of the sayings Jon had and the things we did. If you’re a football person or coach and get hold of those, there is a lot of learning in there. I didn’t give away any trade secrets.” He laughs. “But these are unique things. And that’s why I wanted to tell the story.”